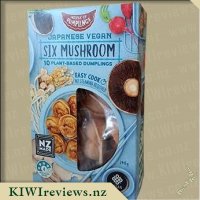 Disclosure StatementFULL DISCLOSURE: A number of units of this product have, at some time, been supplied to KIWIreviews by House of Dumplings or their agents for the purposes of unbiased, independent reviews. No fee was accepted by KIWIreviews or the reviewers themselves - these are genuine, unpaid consumer reviews.
Available:
Online and in leading supermarkets nationwide

Mushrooms are super good for you. Low in fat; high in fibre and protein. They are 100% natural, plant based and vegan friendly. They contain no nasty additives and no steaming is required. 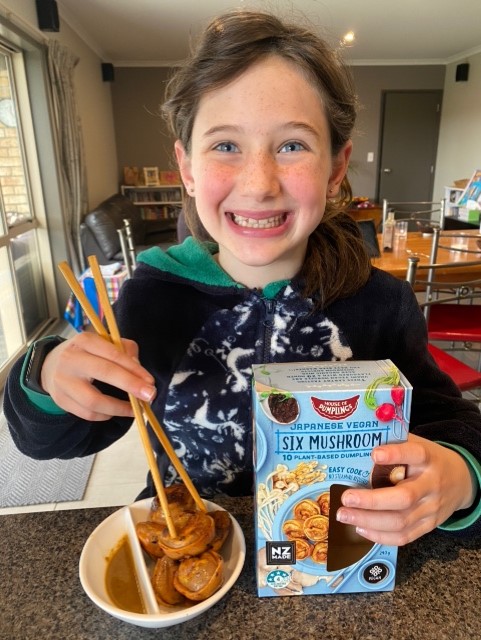 We had several family members on hand to help review this product - eight in all - so it was useful to be able to get plenty of feedback. Four of them were children, which was even better - kids are scrupulously honest about saying whether or not they like something, whereas adults are sometimes too polite! Everyone took a dumpling and bit into it; my plan was then to go round the circle to get each person to comment before they were allowed to finish!

The youngest, Miss Eight, was dubious at first because she thought the mushrooms were too strong. But then she had another bite and decided they were ok! She liked the way the filling stayed together inside its outer wrapping and said they were really easy to eat with her fingers. Her brother liked them too; he can be fussy about some foods, but he really liked these and was quick to point out that there were two left.

Mr Thirteen and Mr Fourteen are both growing fast, and enjoy trying new foods. The more the better! Their one complaint was that they could have both eaten a packet on their own, but they were both positive about the flavour. Mr Fourteen said he would like them as a hot snack with some soup because they would be more filling than toast. Mr Thirteen said he would like them with a side of hot chips!

After the four children had all registered their approval, and the boys were all eying up the two that were still in the pan, the grownups got their turn. One adult thought they were too soft as he could not see the individual ingredients, but given that the dumplings were quite small, it might have been difficult to make the contents chunkier. The rest of us thought the texture was appropriate and certainly it helped to keep the chopped mushrooms together. We all liked the flavour; it was full and earthy with a slightly spicy kick and a hint of tomato. It was interesting, given that it was a flavour bound to appeal to adult palates, that the children all liked it too.

The cooking instructions on the packet are to fry the pancakes for a few minutes on both sides. We found, however, that they tended to stick when first put in the pan, so we had to keep them moving. Once they had formed a skin on both sides the sticking was no longer a problem, but it was important to be aware of that. We thought they would be nice served as an entree with something like seared red peppers or tomato chunks because the platter would be attractive with the red vegetables and the light brown dumplings set out side by side.

Although we ate the dumplings on their own on this occasion, I would like to serve them with an oriental salad next time. The recommended serving is five dumplings per person, so I would need more than one packet if there were more than two people dining together. Pricewise that compares favourably with a serving of meat or fish, and because the dumplings are quite filling, there would probably be no need for extras like rice or root vegetables. And, of course, it is rewarding to find a food that is enjoyed by a wide range of people and is nutritionally sound.

Cinderella Chocolate Mud Cake is a rich, decadent and moist chocolate mud cake with chocolate icing, perfect if you love the delicious taste of homemade cakes with added wow factor. Cinderella makes it easy to bake the perfect cake every time. Perfectly moist with plenty of chocolate flavour. Cinderella helps you add a little magic to your baking with extra tips and tricks on pack to dial up the wow factor with your cake. Perfect for birthdays, ... more...