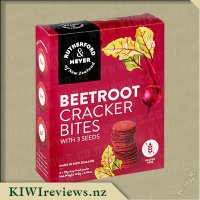 Disclosure StatementFULL DISCLOSURE: A number of units of this product have, at some time, been supplied to KIWIreviews by Rutherford & Meyer NZ or their agents for the purposes of unbiased, independent reviews. No fee was accepted by KIWIreviews or the reviewers themselves - these are genuine, unpaid consumer reviews.
Available:
via online store and select retail outlets
Samples for Review:

TOP them with cheese, DIP them in hummus or EAT them solo! Whichever way you choose, enjoy these delicious crispy snacks guilt-free!

These were an unusual combination from the description for me. I was keen to try something that sounded very experimental. The three seeds were a bit hard for me to identify individually as I am not completely familiar with them. The overall effect was wonderful though. They held together well (not that many breakages which was good). I also loved that there were two 70g packs inside so you could use one and then not have the rest go stale. A great serving size to go with other things.

The seeds were the unusual aspect that I thought about a bit more too. Poppy seeds for me are usually the runaway item on top of things so it was great to find them embedded well and adding a bit of texture and colour. I did get asked by a child "what are the dots?" Linseed for me just adds a bit of real moistness but I couldn't get a taste from it. Chia was the strongest impact taste wise but I think the combination is great together.

I loved the colour and we did use a combination of these and more "beige" crackers for a lovely platter and visually it was a great success as well. I am a beetroot fan from way back and really like that it is coming back into fashion and this was a wonderful use for it

Rutherford and Meyer was a new company for me and I really felt the quality and consideration came through in all their products I tried (three kinds of crackers). I thought the boxes were a good size that meant nothing got damaged too much and they sat as a lovely combo on the shelf together. I will include these in gift boxes in future as they felt like a real treat. Regarding the beetroot cracker bites I loved the overall interestingness of this experiment and will definitely be trying these again. Perfect with Christmas coming.

I used to adore beetroot when I was a tween but ate so much of it that I made self sick of it and haven't been able to eat the stuff ever since, though I have found in the past few years that I can eat things flavoured with beetroot, which of course means more options in the diet. I opened up just one of the two packets and offered it up to the kids to have a try. My 12yo thought that it tasted ok but given the label and the colour of the crackers, they were expecting more of a beetroot taste and were disappointed that it wasn't a strong flavour, however, they thought it tasted better with some hummus but regretted that they didn't find it tasty enough to be able to snack on as it was out of the packet.

I gave it a try and didn't think much of the flavour on its own, there was something a little off about the initial taste and so I wasn't interested in eating any more of them on their own. I tried it was some cheese and ham but it didn't quite work with the crackers and I ended up feeling a little let-down. I then dipped these in some hummus and again, found it rather ho-hum and moved on to the next crackers. My 14yo thought that they tasted good and had more, my 10yo decided that they didn't like the crackers at all. These crackers weren't a hit for any of us and we won't be getting these again.

Rutherford & Meyer Cracker Bites Beetroot flavour with three seeds. Chai seeds stand out the most to me and these are so tasty. I really like the texture and taste, the beetroot flavour is there but not overly strong. The size of the crackers are just wonderful, nice wee round bite-size crackers which are just perfect with dips and perfect for sharing with family and friends. Perfect for kids and perfect for the little ones.

I have a couple off little ones, a toddler and a one year old baby and they really enjoyed eating these crackers. For this my niece who can't have gluten she really loved these crackers knowing that they were gluten-free and she was able to share a lovely platter with us when we all sat at the beach camping.

Inside the box there is two packets so you can open one packet and save the other one for another day. With each packet there is heaps of crackers and plenty enough to go around. The Company have definitely been generous with the crackers and the packets and great having two separate bags so sometimes when you open a box a lot of them get wasted because you don't eat the whole box in one sitting so it was great that they come in two separate bags. Overall I really like these crackers and its great value for money.

We definitely would be buying them again, they are great to have in the cupboard. Perfect for when you know friends just stop in and you have a wine and some crackers and dip. Great portion size and one packet to go around everyone without wasting the whole box and you can save the other packet for another day to open. Would definitely recommend these to family and friends and can't wait to buy some more for my cupboard.

I adore beetroot and love to have it on most things, so when I saw this up for review I jumped at the opportunity. I have been keeping this one back from everyone else because I wanted it all to myself. So sitting in the sun after work I opened up the box to enjoy alone with Smokey Hummus with Garlic and Tahini.

Having tired another flavour earlier this week I was already aware that there were two packets waiting for me so this time there was not as much as a shock. The crackers were a nice vibrant red and they looked divine. I took my first one covered in the hummus. Taking a bite all I could taste was the hummus so after finishing the cracker I took a plan one and tried that and to be honest I do not like the taste of it on its own. The taste it rather peculiar because it is rather plain to begin with and then a flavour comes out from nowhere and for some reason the flavour to me just tastes wrong. It does not work. I tried again with hummus to which I enjoyed, as the combination works fantastically together - but as a cracker by itself I do not enjoy.

This is rather disappointing to me because I had such high hopes for it. I thought I was going to love it the same one I loved the flavour I had earlier this week. The whole family was taken by it. I assumed this was going to be the same thing. Because, I have opened alone I also have nobody else to get an opinion from. I still did manage to eat half a packet by myself but that is mainly due to the hummus. Unfortunately I can not see us buying this particular flavour again.

We love wafer biscuits in our house; I enjoy them equally on their own or with toppings or dips. These crackers are quite different from any others I have found, however; their bright red appearance adds instant cheer to a cheese platter, and I can see they will be useful as a decorative addition to a seasonal meal in December - possibly with sprigs of fresh green herbs so they make a holly themed centerpiece for a fancy dinner party. The only downside of the biscuits was that they did not last very long because they were so nice! Luckily, there were two separate sealed packets in the box, so I opened one for review purposes and put the other one out of reach.

The crunch was the first thing we noticed - they are delightfully crisp, but once you bite into them they melt in your mouth. I opened the second packet to nibble while I was taking review notes, and put some into a tin for later. I did notice that they had lost some of their crispness by the next day, but this was quickly remedied when I put them in a single layer on a paper towel in the microwave and zapped them for a few seconds. Once they had cooled, their original crispness was fully restored.

The taste varied according to who was trying them. There were four of us when I opened the first packet; I could distinguish the slightly earthy beetroot flavour and so could my aunt; the other two, however, said they would not have known they were made from beetroot had it not been for the intense colour. But all of us enjoyed them, and found they were the perfect partner for beetroot hummus; we passed around a pot of this hummus so we could all dip our crackers, and at one stage nearly came to blows because one person was holding on to it for too long!

As there were just two of us to try the second packet, we were able to have more options. There were no surprises in finding the crackers went really well topped with thin slices of pickled beetroots and aged cheddar; as toppings these were hard to beat. We also thought they would be good as a healthier version of nachos, served with a bean and tomato sauce, but we have yet to try that because once again we had run out. I do like the idea of having the contents divided into two smaller packets as you are not left with a half empty box. Not that this particular problem is likely to arise. They are too moreish!

Soya and vanilla in perfect harmony. Alpro vanilla dessert definitely proves that the plant-based goodness of soya goes with the timeless and subtle vanilla taste. The velvety-smooth, creamy texture and rich, round vanilla taste makes every spoonful delicious.