Disclosure StatementFULL DISCLOSURE: A number of units of this product have, at some time, been supplied to KIWIreviews by the company for the purposes of unbiased, independent reviews. No fee was accepted by KIWIreviews or the reviewers themselves - these are genuine, unpaid consumer reviews.
Available:
Online and in leading supermarkets nationwide 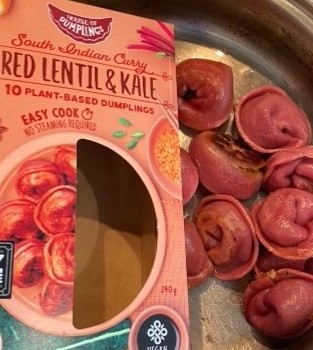 These dumplings were a totally new culinary sensation for me. The first thing that struck me was the sheer volume - although they look as though they are the same size as any other dumpling, they are "meatier" (if you can use this descriptor for a vegan product!) and satisfyingly filling. The second surprise was the flavour - yes, a definite samosa taste. We all came to that conclusion at the same time. The third difference was the look of the filling. You can clearly see the contents when you bite into them - no amorphous mush! Again, that would be usual in a samosa but not so common in a dumpling.

Not only do they taste different, they also look different. They are red rather than light brown, and they retain their colour even after cooking. We all thought they looked amazing, both before and after their frying-pan experience. When they were served up, we decided that the three adults would have two apiece and the children would share one to see if they approved - if so, they would get another one to themselves. Miss Eight was a little dubious about eating beetroot flavouring while Mr Ten does not like lentils, so we were not going to waste a whole one for each of them if they were just going to reject it.

As expected, Mr Ten gave them the thumbs down after one small bite. He said he could see the lentils so that was enough to put him off. This was the very aspect that the adults appreciated, however - we like to see what we are eating and there was no mistaking the whole lentils. We suggested he chew them, but he was not keen and passed off the rest of his half to his sister. She was quite happy to eat the rest of his portion, and ended up eating another two full dumplings on her own. The biggest appeal for her was the pastry - to her surprise, she loved the beetroot flavour (which was actually quite mild and was taken over by the curry aftertaste). She was very keen that we should get them again.

All three of the adults were positive about the flavour - not too spicy, but just enough to give that hint of samosa. We had discussed the dumplings and come to that conclusion individually before reading the information printed on the packet. This confirmed what we had thought - the description refers to "a luxurious combination of samosa and dahl".

Preparing the dumplings was a quick and easy task. The instructions were to pan fry or barbecue until golden brown on both sides. No steaming was required, although we did add a small sprinkle of water because the heat was a bit too high and they were sticking to the pan. Within five minutes they were browned on both sides and ready to serve, and although they were cooked from frozen, the inside was hot and aromatic.

We all enjoy food, and appreciate vegan and vegetarian food just as much as meat based dishes, but sometimes find vegan food can be either too stodgy or just too light. These dumplings hit just the right balance. They are probably the most substantial of any dumpling we have tried, but manage to avoid being heavy. Clearly the pastry and filling are exactly the right combination. I could eat five on my own as an entree (or as a main with salad or other vegetables), but they are so nice I could probably manage the whole packet at a pinch!

A delicate parcel of soft, cocoa nougat wrapped in a light coat of Roshen chocolate. Individually wrapped for sharing... if you want to.