Rise of the Jain 3 - The Human review 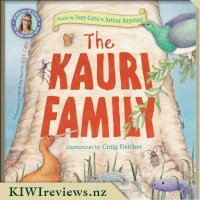 Disclosure StatementFULL DISCLOSURE: A number of units of this product have, at some time, been supplied to KIWIreviews by Scholastic (NZ) or their agents for the purposes of unbiased, independent reviews. No fee was accepted by KIWIreviews or the reviewers themselves - these are genuine, unpaid consumer reviews.
Available:
May 2020

Craig Fletcher has provided the illustrations for a quintessentially Kiwi picture book that beautifully depicts the natural treasures that may be found in a kauri forest. Spot the kiwi, the tuatara, the weta, and more - even the twinkling Matariki stars above the treetops.

The song which accompanies the text can be streamed at www.hungama.com/album/the-kauri-family-sing-along-with-suzy/53519231/

Flit the Fantail and the Flying Flop
Rating: 9.8

Korora and the Sushi Shop
Rating: 9.5 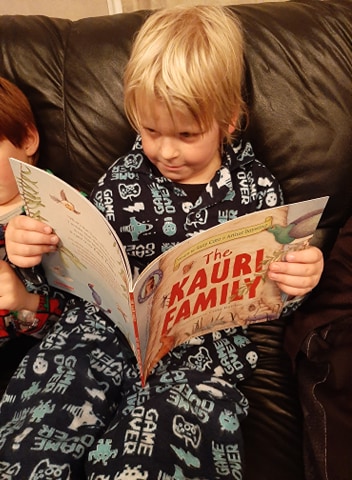 The Kauri Family Written by Suzy Cato and Arthur Baysting is a delightful book featuring many of New Zealand's Animals and Insects which is always good for children as they can relate to what they are seeing and reading. The illustrations are done by Craig Fletcher and are very fitting for the story as they have an almost pastel look to them that looks textured as if you could almost be fooled to touch them expecting to feel something. We read through the book with our two youngest boys and paused at each page as it gave you a hint as to what was being spotted on the Kauri tree seeing if the boys could spot what was hiding and in the majority of the pages they guessed correctly before moving on with the story.

I found it a little bit off though while reading as it would jump from a rhyming section into a section that didn't rhyme which would throw me off rhythm but it didn't put the kids off too much as they were too into trying to figure out what they were meant to be spotting and looking at the artwork anyway. On the back of the cover and at the rear of the book there is a page with Animals and Insects that it asks to see if you can spot them throughout the book. I thought it was a different list of Animals and Insects to spot on the rear page but it was just repeated from the one at the start of the book.

The kids really enjoyed that it included Matariki as they have learnt about it at school and felt knowledgable to point it out. The kids really enjoyed this story and I can see them reading it again multiple times and taking it to school to show their classmates and friends. It is always good to see these types of books coming out of New Zealand and gives you a sense of pride of what we have on offer here. 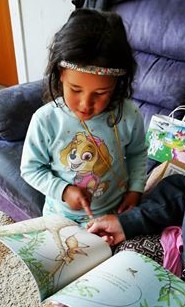 Books that help little ones to learn about our native New Zealand fauna are always delightful - and The Kauri Family manages to slip in a mention of Matariki as well. The twins and their little brother and sister were all delighted to help me review this book. Since they are big schoolkids now, the twins are able to read some of the text themselves. Miss Four, however, is at a kohanga reo but was still able to point to the various creatures and tell me their names in both English and Te Reo.

The illustrations are particularly suitable for very young children. Even Mr Two was able to follow the story, tapping on the pictures with excitement as we stopped the story to talk about each one. Reading a book is a slow process with little ones, of course, because we have to stop frequently to unpack the action and to talk about the pictures. This often involves looking at the previous page as well as the current page - so all of this makes for a slow but highly rewarding process.

When we had finished reading the book and the twins had gone out again to play, Miss Four sat down to read it a second time with a very attentive Mr Two. We had downloaded the song that goes with the text so she tried to sing along with it - it was almost as if she were reading the book properly! Mr Two joined in with the odd word, but was more intent on breaking into an occasional dance step before returning to the book again.

Interestingly, the children recognised all the creatures and the twins knew about Matariki as well, but none of them remembered exactly what a kauri looked like. Clearly there is still some work to be done on identifying trees. Just before I was leaving, I remembered that there was a kauri just outside their gate so we all trooped out to inspect it and also to see if there was any wildlife around. An obliging pukeko suddenly popped out of the rushes nearby and scuttled past the tree - much to everyone's delight. Although pukeko does not feature in the text, it is certainly included in the illustrations. So they decided "their" kauri was special and therefore had its own collection of creatures.

The book appealed to them so much that I would love to see a sequel that features native trees - I am sure they would love this as well. It is so rewarding to see quality local books available for under sevens, and when they are attractively presented as this one is, they love to "read" them on their own once they are familiar with the text. Being able to download the music as well is doubly useful.

From the creators of the hilarious Nee Naw and Stink-o-saurus books comes a new spin-off character kids will love!

There's a fire in a field where two goats, Plinky and Plonky, are trapped. Nee Naw is on the way, but when a bridge collapses and Nee Naw can't drive any further, Ellie Copter whirrs into action and saves the day.

With an easy-to-sing melody and a catchy refrain, this book is brilliantly illustrated ... more...