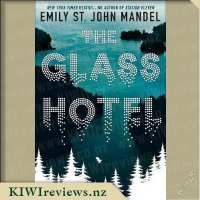 Vincent is the beautiful bartender at the Hotel Caiette, a five-star glass-and-cedar palace on the northernmost tip of Vancouver Island. New York financier Jonathan Alkaitis owns the hotel. When he passes Vincent his card with a tip, it is the beginning of their life together.

That same day, a hooded figure scrawls a note on the windowed wall of the hotel: "Why don't you swallow broken glass". Leon Prevant, a shipping executive for a company called Neptune-Avramidis, sees the note from the hotel bar and is shaken to his core. Thirteen years later, Vincent mysteriously disappears from the deck of a Neptune-Avramidis ship.

Weaving together the lives of these characters, The Glass Hotel moves between the ship, the skyscrapers of Manhattan, and the wilderness of remote British Columbia, painting a breathtaking picture of greed and guilt, fantasy and delusion, art and the ghosts of our pasts.

I remember reading Keri Hulme's "The Bone People" many years ago and finding that the book did not make complete sense until I reread the first few pages - and then everything fell into place. This book uses the same device; the beginning does not make sense until you reach the very end, and then it all works. In effect, the entire narrative is presented in a non-linear fashion, with frequent changes of time, setting, and even reality as it morphs in and out of parallel events, some possible and others delivered more via a what-if scenario.

Although the story is easy to follow, I found I was often rereading sections because some of the details made sense only in retrospect. Even the narrative style, which hovers between first and third person, contains clues as to which of the main characters is present in a given scene. This in itself was not a problem because it did not detract from my enjoyment; instead, it gave me an increased understanding of what was happening. Rather than a criticism, this is simply a comment on a very individual writing style.

The main characters are presented little by little as their physical appearances and attitudes develop in the course of the story. This has the effect of causing the reader to meet and get to know them in the same way that real life familiarity grows exponentially with time - whether in the context of a friendship or that of a business relationship. Vincent is the key character; all the others are presented in terms of their link to her, whether direct or indirect - they may be familial (her half-brother Paul), romantic (Jonathan and Geoffrey), business, or simply friendship-based. The story shifts back and forth from Vincent to exploring the other main characters; often this investigation is undertaken from more than one perspective or alternative universe, a technique which fleshes out the characters to ensure they are seen as multi-dimensional.

When I started reading, I was expecting a crime thriller, possibly even a book about a crime of passion. But this is very different, and so much more. It is simultaneously a book about the supernatural, fraud, deception, and corruption. There is even an element of romance, although this is underplayed and at times only hinted at. It is never made clear whether or not Vincent is aware of the criminal element that surrounds her; it is strongly hinted at, but never stated definitively. Even her death - a theme that recurs from the very first page - is puzzling. Was it an accident? The reader is never told.

Something that stands out for me is the sheer readability of the book. I was never tempted to put it down, although I took more time reading it than I would normally spend on a publication of this length. I was never bored. Intrigued, yes. Entertained, yes. I even plan to read it a second time because the plot complications are so intricate that I am sure I may have missed something. The settings, too, are fascinating - the hotel with its extravagant decor, a sharp contrast to the pokiness of the Neptune Cumberland's cabin; the executive offices in a high rise building in New York; the Federal Correctional Institution (FCI) in Florence; Jonathan's "absurdly enormous" house in Connecticut (complete with swimming pool, of course); the beach in Caiette. The exotic vies for attention with the prosaic, underlining the premise that nothing is as it seems, and nothing lasts forever. Perhaps the most sensible decision is that of Leon Prevant who meets poverty head on by simply abandoning his house and possessions and travelling off with his wife Marie into the never-never in their motorhome, relishing such simple pleasures as walks on the beach and an occasional meal in a diner. Perhaps that is the ultimate aim of living!

For a deadly game is being played in the Faerie court and whoever produces an heir first wears the crown. But as she auditions her royal guard - illustrious warriors equally at home with gun and blade or spell - for the ... more...