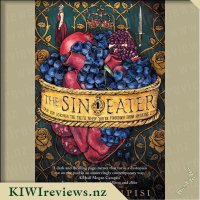 An old adage says there are really only two stories: a man goes on a voyage, and a stranger arrives in town. This is the third: a woman breaks the rules...

A Sin Eater's duty is a necessary evil: she hears the confessions of the dying, and eats their sins as a funeral rite, thereby guaranteeing their souls access to heaven. Stained by these sins, she is shunned and silenced, doomed to live in exile at the edge of town.

Recently orphaned May Owens is just fourteen, and has never considered what it might be like to be so ostracised; she is more concerned with where her next meal is coming from. When she is arrested for stealing a loaf of bread, however, and subsequently sentenced to become a Sin Eater, finding food is suddenly the last of her worries.

It is a devastating sentence, but May's new invisibility opens new doors. And when first one then two of the Queen's courtiers suddenly grows ill, May hears their deathbed confessions - and begins to investigate a terrible rumour that is only whispered of amid palace corridors.

This is a dark and thrilling page-turner that turns a dystopian eye on the past in an unnervingly contemporary way.

From the outset, I was intrigued by the way this novel unfolded. It begins with an apparently authentic royal family tree and "compendium of diverse sins", deliberately presented in an archaic typeset to highlight the fact that this is to be a story set several centuries ago. As the story unfolds, it is clear that the names of the "royal family" are based on those of the Tudor royals. For example, Henry VIII is Harold II; Anne Boleyn is Alys Bollings; Elizabeth I is Bethany. The names are close enough to be recognisable, but the resemblance ends there. This is not a history; it is a tale inspired by real people, but nonetheless a narrative based in a parallel world of what-might-have-been. By the time I had read the last page, I found myself still wondering... what if...?

I found my familiarity with the works of Shakespeare to be extremely useful: some of the words and turns of phrase used in the book could have been lifted straight from the pages of A Midsummer Night's Dream or The Tempest. The representation of the time reflects some of the bawdiness and downright crudeness present in many writings of the period - not only Shakespeare's - and helps to set the scene in a rough and inhospitable environment where poor people fight for survival amidst social and health issues such as poverty, leprosy, lack of basic hygiene, witchcraft, lead poisoning, and surgery without the benefits of anaesthetics.

The story of Meg is unique in that she is a professional sin eater. This was not her choice but despite the drawbacks of the isolation caused by her work, it did ensure that she ate - no small advantage when food was often difficult to get. Her situation also gained her access to places not usually accessible to those at the very bottom of society's hierarchy. Campisi uses this aspect of Meg's work to highlight how easily she gains various snippets of information and is able to become an amateur sleuth as she attempts to solve a series of murders. There are also various impressions of society generally as Meg moves from palace to hovel, prison to town market. The descriptive passages are vivid to the point that I had no difficulty in picturing for myself what Meg's surroundings might be like.

Another device which helped to bring the book alive for me was the inclusion of a number of children's rhymes - sometimes with the text altered to fit the situation. These rhymes or chants were common in Tudor times, often referring to events (usually disastrous or criminal) of the time. Many of them still live today in modern collections of nursery rhymes although the hidden meanings are not apparent to the children who recite them. But the way that Campisi has included her own adaptations throughout the text provides both a social commentary on the event unfolding and a light-hearted look at the way the people of the time viewed their world. Song, especially humorous or satirical, has always had a place in making the unthinkable more bearable. Music is still a part of modern funerals, whether as hymns sung by the entire congregation or as quiet "mood" music played on an organ or similar instrument.

It is fair to say that I enjoyed the book from the very start, and was actually disappointed when I reached the end. I wanted to know what happened to Meg afterwards! But there again, that is the sign of a good work of art. It leaves you intrigued, wanting to know more! I hope there will be a sequel at some stage. I would be the first in line for a copy.

Perfect for fans of any age, this fun-filled activity book is based on the LEGO Star Wars universe. Star Wars is the most recognizable scifi brand to date, its legacy spanning generations. LEGO has proved itself to be a powerhouse among younger boys. Together, the two brands are unstoppable. Following on the success of our LEGO Star Wars publishing program, our favourite heroes and villains return in an action filled and hilarious Search and Find.