The Impossible Quest #2: Wolves of the Witchwood review 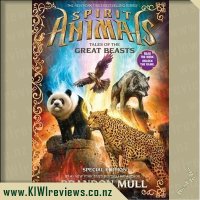 In the world of Erdas, there's a story of four noble animals who sacrificed everything to protect their homes from the ambitions of a mad king.

They were Briggan the Wolf, Uraza the Leopard, Jhi the Panda and Essix the Falcon.

Long before they were spirit animals, the four were still legends - Great Beasts, the most powerful beings to roam the wilds of Erdas.

These are tales of the true heroes and villains in the war that started it all.

Having been following this series since the beginning I was quite excited to see there was a bonus stand alone book to compliment the series so was very quick to jump at the opportunity to review it. It has been a while since the last book in the series came out so it was good to get a visit to the world of Erdas for a quick little spirit animals fix!!

This book was a easy read with a few different stories coming in throughout so we can see how the battle of the Devourer and the conquerors began, and where the four fallen spirit animals came into it. We get to see the stories of Briggan, Uraza, Jhi, and Essix from the beginning which was so great it helped little bits of the series storyline click into place which we might not of picked up on this far into the story. It was nice to have a bit of background information to know where it all started to get us to where we are in the story today.

The book is written by different authors each telling the tale of a different great beast so they almost read like little short stories. Although each story is unique and has it's own characteristics the authors have obviously done a good job of working together so that the stories flow really nicely. I think as each book in the series has been written by these different authors we have got used to the changes in writing style but they all seem to have the same feel and telling of the same story which is quite talented really.

This book has certainly made me want to read the next installment even more I feel I know the great beasts so much more now especially Uraza who I may have just fallen more in love with so this bonus book was definitely a great little addition to the storyline. We see many of the sacrificies that have been made in the effort to save Erdas which helps us remember why the four fallen have returned once more and what is still at stake, can't wait to get my teeth into the next book next month!!

Well, it is interesting for this series to have a bonus book, and think that, as the series is nearing it's conclusion, a bit of backstory will help make things a little clearer in advance. This book is not one story, it is actually an amalgamation of 5 different stories by 5 different authors, placed between two covers, enlightening readers on how the great war against the Conquerors began, as well as the stories of the four fallen Great beasts, including the story of their demise. The stories were good, they matched up with the known lore of the whole storyline, and they tell the stories in such a way that they don't have large holes filled with dull moments.

Before reading this book, I had a hard time imagining the Four Fallen as anything other than spirit animals, rather than great beasts, so this story helps me to understand that element of the plot. Even though each story was written by a different author, the styles of the stories all seemed quite indistinguishable from each other, I could not pick up on any of the individual styles of each. It didn't take me long to read through this book, the stories felt quite brief, and they make very light reading, so it is not a big occupier of time.

The book was easy to read, the stories all made sense, and they put the events of the series itself into perspective. While the book did have a bit of a young-person feeling to it, the stories were written in such a way that they are relatively easy to comprehend for young ones, but also possess a level of linguistic sophistication which appeals to people a bit older, so I would have to recommend this book to anyone in their teens. One difference I did like was that each story would start and progress a little differently compared to the others.

For instance, one story could start by introducing a human character, while in another it could first start off from the perspective of one of the Fallen. I was quite surprised to find out just how the Fallen were mentally before they became spirit animals, Uraza was the one I was surprised by the most, as she was quite arrogant at first. It was also pleasant finding out how the rebellious Greencloaks started. Overall, I think that this book is a good little side-dish to the main story, and I was quite happy to read it. Can't wait for the next actual book in the series to come out, though.

Jim Holden and the crew of the Rocinante are part of a vast flotilla of scientific and military ships going out to examine the artifact. But ... more...