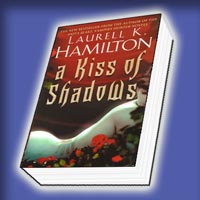 My name is Meredith Gentry, but of course it's not my real name. I dare not even whisper my true name after dark for fear that one hushed word will travel over the night winds to the soft ear of my aunt, the Queen of Air and Darkness. She wants me dead. I don't even know why...

I fled the high court of Faerie three years ago and have been in hiding ever since. As Merry Gentry, I am a private investigator for the Grey Detective Agency: Supernatural Problems, Magical Solutions. My magical skills, scorned at the courts of Faerie, are valued in the human world. Even by human standards, my magic isn't flashy, which is fine by me. Flashy attracts attention and I can't afford that.

Rumour has it that I am dead. Not quite. I am Princess Meredith NicEssus. To speak that name after dark is to call down a knock upon your door from a hand that can kill you with a touch. I have been careful, but not careful enough. The shadows have found me, and they are going to take me back home, one way or another.

So the running is over. But the fighting has just begun...

I must agree, this book was sensually thrilling to a degree not often found in such fantasy. Goblins and elves, magic and mystics... not the usual ground to find sex, domination and pure magical lust running side by side with guns, traffic jams, and sheer brutal powerplays.

Despite reading the sequel first, and thus knowing the rough outcome from the various battles by at least knowing which characters were still in play later in the timeline, I was captivated by this story. It was just as thrilling as if I had no knowledge of the storyline's future. The tension, passion and thrill-factor were extraordinarily high.

Overall, I was amazed at just how much this book drew me in, despite my normal reluctance to indulge in fantasy books. Fnord help me, I think I am becoming a fantasy convert!

Imagine ordinary Humans and magical folk living together, but with most Humans unaware of their faerie counterparts being "magical", thinking of them as just humans, thanks to the use of "glamour" magic. A princess is hunted by her own kind, by her own flesh and blood... her aunt, Queen of the Sidhe of the Unseelie court, and Queen of Air and Darkness. Deadly powers are found, deadly games are played.

This book had me hooked well and truely by the end of the first chapter. Having always been a fan of the world of fantasy and magic, I found it very difficult to put this book down until it was finished, and then I was eager to move onto the 2nd book of the series.
If you enjoy the fantasy genre, then this is well worth a try. And definitely worth a re-read. :)

Nine-year-old Tiffany Aching thinks her Granny Aching - a wise shepherd - might have been a witch, but now Granny Aching is dead and it's up to Tiffany to work it all out when strange things begin happening: a fairy-tale monster in the stream, a headless horseman and, strangest of all, the tiny blue men in kilts, the Wee Free Men, who have come looking for the new "hag".

These are the Nac Mac Feegles, the pictsies, who like nothing ... more...