« Scary Stories To Tell In The Dark review

Ready or Not review

ProdID: 8576 - From the Blitz to the Burmese Jungle and Beyond
Written by Brian Hennessy with Karen McMillan 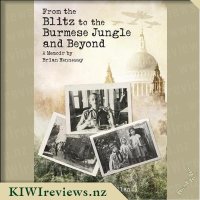 Disclosure StatementFULL DISCLOSURE: A number of units of this product have, at some time, been supplied to KIWIreviews by McKenzie Publishing or their agents for the purposes of unbiased, independent reviews. No fee was accepted by KIWIreviews or the reviewers themselves - these are genuine, unpaid consumer reviews.
Available:
October 2019

From the Blitz to the Burmese Jungle and Beyond product reviews

On joining the British Army, Brian found that his skills with machinery were in demand in his role as an armament artificer. His army career led to a true adventure story as he journeyed via South Africa to India and the remote jungles of Burma. Danger was always present, but his memoir reveals some amazing stories - sometimes humorous, at other times poignant. At the end of the war, he travelled to Japan where he saw for himself the devastation at Hiroshima. After the war, Brian emigrated to New Zealand where he spent the rest of his life.

Brian's memoir was written in collaboration with Karen McMillan.

Re-create your favourite scenes from the movie with these reusable stickers and colourful background scenes.