Home > Categories > Books > Young Adult > And Did Those Feet... review

« Voice of the Gods review 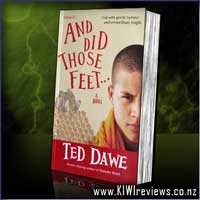 And Did Those Feet... product reviews

The year Mum died and Dad went mad I was packed off to live on a farm for a while.

Sandy will tell you, he looks like an ordinary kid on the outside, but on the inside, he's a time bomb. Ever since his mum died, and his father started slacking off on the dad front, he's felt lit-up by a barely-contained rage.

After an ugly showdown at school he gets sent to stay at his aunt and uncle's Taranaki farm. "Going agricultural" is bad enough for a city kid, but worse: his rellies are members of an unusual group who follow the teachings of poet William Blake. Branded "cultie" along with his cousins at the country school, Sandy reckons you can't go much lower.

Then events on the farm, and at school camp, show Sandymore about his own strengths than he'd ever thouht possible.

This is the story of how a boy faces up to a season of disasters: some of his own making, some brought upon him by others. Told with gentle humour And did those feet... is an outstanding novel from award-winning writer Ted Dawe.

Such a gentle warm story, I found And Did Those Feet to be a thoroughly enjoyable read that had depth without being heavy. Told from Sandy's point of view, we're shown first how it used to be, the time Sandy calls "the good old days"- before his mum died. Then things change, and Sandy goes from being a happy teen, to a kid fuelled with so much anger towards the way things have gone, and mostly towards his father, that he takes offence to comments made by a kid at school, and starts a whole chain of events that take his life in a downward spiral - or so he first thinks. Reading about Sandy's time on his Aunt and Uncle's farm reminded me of the few times I've stayed on a farm, all back when I was a kid, and I remembered just how therapeutic I'd found it. Those are still times that I remember with great fondness, and that probably added to why I enjoyed this book so much. This was much to my surprise, as I'd been a bit hesitant when I first started reading, thinking it wouldn't amount to much. I still wouldn't say it's a fantastic book, but it would definitely fit the title of "a great book". If you're after something that has meaning, but doesn't require any heavy thinking and makes a quick easy read, then And Did Those Feet is certainly worth a shot.

Score: 5.8
Product reviews for listing 829: Portrait of the Riviera -  Written by Carolyn McKenzie

The Riviera is a name that conjures sparkling seas and endless sunshine: palm trees, outdoor cafes and tanning bodies on the sand. But behind the stereotype of wealth and glamour is one of Europe's most beautiful and accessible tourist locations. Take it from one who knows: while renovating her apartment in the medieval ramparts of Ventimiglia, New Zealander Carolyn McKenzie was stunned by the variety of inspiring places surrounding her. Now an ... more...