Home > Categories > Books > Fiction > The Triumph of the Sun review

ProdID: 849 - The Triumph of the Sun
Written by Wilbur Smith 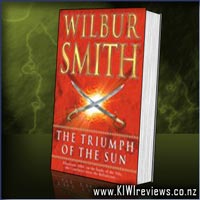 Disclosure StatementFULL DISCLOSURE: A number of units of this product have, at some time, been supplied to KIWIreviews by Macmillan Publishers Ltd or their agents for the purposes of unbiased, independent reviews. No fee was accepted by KIWIreviews or the reviewers themselves - these are genuine, unpaid consumer reviews.
Available:
October 2005

The Triumph of the Sun product reviews

In the Sudan, decades of brutal misgovernment by the ruling Egyptian Khedive in Cairo precipitate a fierce and bloody rebellion and Holy War headed by a charismatic new religious leader, the Mahdi or 'Expected One'. The British are forced to intervene to protect their national interests and to attempt to rescue the hundreds of British subjects stranded in the country.

Along with hundreds of others, British trader and businessman Ryder Courtney is trapped in the capital city of Khartoum. It is here that he meets Captain Penrod Bellantyne of the 10th Hussars, as well as the British Consul, David Benbrook, and his three beautiful daughters. Against the vivid and bloody backdrop of the siege of Khartoum, in which British General Charles George Gordon is killed and the British retreat, these three powerful men fight to survive.

Rich with vibrant historical detail and infused with his inimitable powers of storytelling, THE TRIUMPH OF THE SUN is Wilbur Smith at his masterful best.

The Seriously Extraordinary Diary of a Pig
Rating: 10.0

I haven't read a Wilbur Smith book in years, so it was interesting to pick up this and see where he had gone since I'd last read...
My previous readings of his novels were all Courtney based books, which I thoroughly enjoyed, so it was interesting to see a different side of one of the Courtney clan in this - though it took me 3/4 of the book to click that he was a 'Courtney'! I blame it on post exam stress... ~blush~

Anyway, on with the review...

As always, Mr Smith has done a fantastic job setting the scenes in this book; his descriptions of the countryside, the traditions of the people, the sights and smells of the city, the hunting of the elephants and the dinner parties at the British Consulate. These took me out of my living room and straight into the heat for the city, surrounded by the sounds of the battles being fought...

What I was disappointed with though, was the depth of the characters!
While there was a certain level of interest with knowing what was happening with each of the three girls and the men that were important to them, it wasn't that that kept me reading. There needed to be something stronger there with the characters, especially the twins, who were such strong characters in the pages, yet got missed out in many places throughout the story...

I would have to say that it wasn't one of Wilbur Smith's finest works, though it was a story that was well told and that drew me into the world of Khartoum for the time it took to read.

Silvey Chan lives above a shop in Auckland's downtown Chinese district. Hers is a close-knit community with its own traditions and festivals - and even a neighbourhood ghost. New Zealand is at war when Silvey starts her diary, but for Silvey this is just a backdrop to the main issues of her world - the closure of her school and the arrival of Chinese-American soldiers.

Included in the book are archive photographs of Auckland's Chinatown during this period.