The Triumph of the Sun review 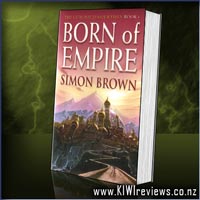 Disclosure StatementFULL DISCLOSURE: A number of units of this product have, at some time, been supplied to KIWIreviews by Macmillan Publishers Ltd or their agents for the purposes of unbiased, independent reviews. No fee was accepted by KIWIreviews or the reviewers themselves - these are genuine, unpaid consumer reviews.
Available:
Now

The Kevleren dynasty rules both the Hamilayan empire and the kingdom of Rivald because they, and only they, can use the Sefid, the true source of all magic. But Wielding the Sefid comes at a terrible cost, the sacrifice of something loved.

Hamilay's new empress Lerena, no sooner ascends the throne than she is faced by the joint crisis of an expansionist Rivald overseas and an unstable, love-spurned sister at home - whose influence with the Sefid is greater than any who have come before. Then a revolution in Rivald creates the greatest threat her family has ever faced, and the Kevlerens confront extinction at the hands of those they trusted most.

Hmm... isn't it funny how you can enjoy a book, yet not be inspired to say wondrous things about it sometimes?

This is a different type of fantasy than I normally read, I usually prefer the slightly amusing (kinda) David Eddings/Terry Goodkind/Robert Jordan-esque stuff...
But this isn't... It's a lot drier than those.
It still has it's base in magic, but it's a darker type, the type that you have to take something precious and destroy it to do what you want...
The races and people in the story are all very earth bound - you can pick where the author has taken them from around the world.

In a lot of cases the magic of this story is talked about, but not actually shown, more implied then overt... And this leads the story to feel more about the political intrigue that occurs than anything else.
The other slightly strange thing about this book is the blurb on the back - it talks mostly about Lerena, but there is very little in the story about her, she is by and large a smaller character in the grand scheme of things, whereas I would have thought she would be one of the main focuses of the book - oh, she plays a very important role, don't get my wrong, but you don't really find out who she is...

I did enjoy the book and the characters that I got to know throughout the book, and would definitely like to read the next in the series, but just a warning for others, this isn't the lightest of fantasy novels to pick up for a Sunday afternoon in the sun...

Grab your pencils, pens, markers and imaginations, and have fun doodling with us.