ProdID: 7747 - How Not To Stop A Kidnap Plot
Author: Suzanne Main 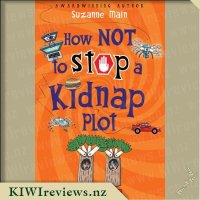 Disclosure StatementFULL DISCLOSURE: A number of units of this product have, at some time, been supplied to KIWIreviews by Scholastic (NZ) or their agents for the purposes of unbiased, independent reviews. No fee was accepted by KIWIreviews or the reviewers themselves - these are genuine, unpaid consumer reviews.
Available:
October 2017

How Not To Stop A Kidnap Plot product reviews

Michael is on a mission. After a run-in with his sworn enemy, Angus, Michael's brilliant payback plan BACKFIRES. Now he's in the school production - as a tree - his WORST NIGHTMARE! When Michael discovers a twisted KIDNAP PLOT, his troubles soon multiply. It's obvious that rich-kid Angus is the target.

Can Michael and his motley bunch of mates solve the kidnap mystery and destruct a planet-threatening plan BEFORE IT"S TOO LATE?

A high-tech adventure lots of problem-solving and just a touch of farce. Chapter illustrations are by Fraser Williamson.

This story had an element of diary of a wimpy kid to it, our hero is a misunderstood middle school lad, who has a best friend who is the only one who really understands him. It was an amusing and interesting book, and both my children twelve and fourteen, said that they would read it again.

Our heroes Michael, and Elvis, are very engaging, and young readers seem to relate to them and the issues that they face, such as bullying, mums (Michael's mum has three stages of angry!) and worse being cast as a tree in a school play, (how embarrassing). The story starts with Michael having a dreadful day, with a bully tormenting Michael before he even enters the school gate. The author weaves complex language into the story, but the genuine affability of the character means, young readers are so woven into the story they won't notice they are learning as they read.

At the beginning of every chapter, little cartoon characters set the scene for our readers, but as I read through I felt they added a little fun to the book. The technological elements featured strongly throughout the story, one of my children felt there was too much technology, but the other child was carried away by the possibilities and asked if we could get a drone!

Both my children said they would read this story again, and my youngest child went and searched the author, Suzanne Main on google, and she was delighted to find there was another story starring Michael, and we are off to the library to request "How I alienated my Grandma" next week. One thing I really liked about this story was that it was written by a New Zealand author, it's great to see our writers producing fantastic stories that are engaging kiwi children. 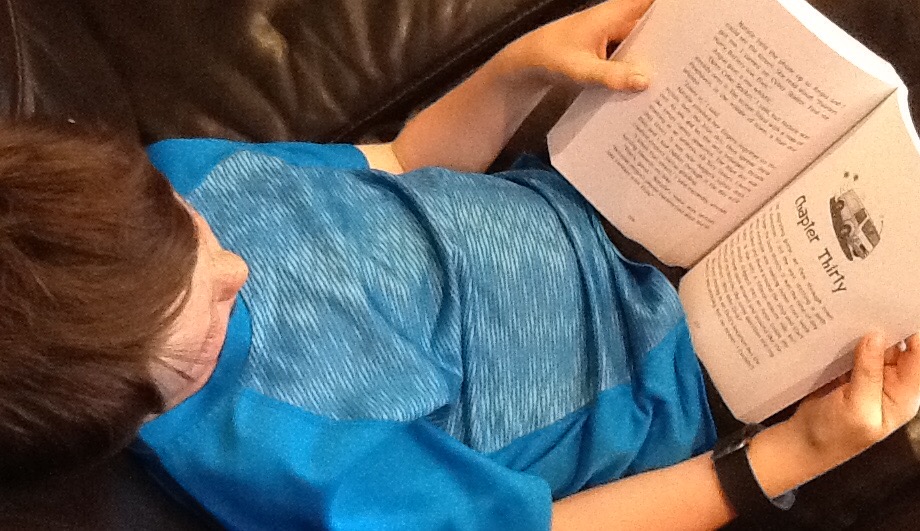 Mr Seven is reading more and more challenging books and is now nearly at the stage where the graphics are often irrelevant. This book combines a solid text story with intriguing little graphics at the start of each chapter which hint at what is to unfold but do not interfere with the flow. It is listed as being suitable for 8-12 year olds but children vary widely in their development; certainly this book is well within the range of a six or seven year old who is an avid reader.

There are several strands which appeal to youngsters and which Mr Seven immediately picked up on. First, there is the ever-present theme of school bullies. Unfortunately, all children quickly become familiar with this issue when they first start school and have to learn to cope with it. Mr Seven said that if he met bullies like Angus and his friends he would let a teacher know straight away so they could be dealt with. However, as it turns out, Angus is not so bad which of course is the desired outcome!

The second strand is that of technology and scientific innovation. Mr Seven was fascinated by Cecil and the whole concept of facial recognition, artificial intelligence, drones, and miniature robots made to look like spiders. Children are naturally curious, and often quicker than adults to take on new concepts and understand how they apply to the real world. This story affords plenty of opportunity for the interested reader to think about different technological possibilities and accept them as part of the plot development.

The third strand is that of friendship between the boys - the main character, Michael, who is also the narrator, and his friends Elvis, Natalie, and (eventually) Angus. Together they embark on a mission which includes an exciting race to beat the kidnappers and save the world.

Mr Seven read the whole book in one sitting. He had a sore foot and had to rest it, so he was on the sofa with the foot propped up, his water bottle close at hand, and the book resting on his tummy. He had a couple of breaks for lunch and afternoon tea, and took advantage of these to rest his eyes, but otherwise the story kept him engrossed from start to finish.

When he finally closed the book and put it down, I asked what he had thought of it. He replied that it was pretty good, and his favourite parts were where Cecil spoke to the children as he was so formal! So that was a definite thumbs-up from Mr Seven. And I enjoyed it too so that is a positive from both of us.

One Christmas Eve a man buys presents for the woman he loves, beginning with a partridge in a pear tree. The couple travel through town and gifts pile up, until they get to a Christmas party so magnificent it is a little overwhelming leading them to slip back to the quiet of home, where the partridge is waiting. This visual feast from acclaimed illustrator Alison Jay is the perfect festive gift.