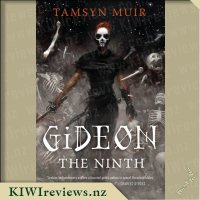 The Emperor needs necromancers. The Ninth Necromancer needs a swordswoman. Gideon has a sword, some dirty magazines, and no more time for undead bullshit.

Brought up by unfriendly, ossifying nuns, ancient retainers, and countless skeletons, Gideon is ready to abandon a life of servitude and an afterlife as a reanimated corpse. She packs up her sword, her shoes, and her dirty magazines, and prepares to launch her daring escape. But her childhood nemesis won't set her free without a service. The emperor has called his necromancers to action, and Harrowhark is set on Gideon attending her as bodyguard. If Gideon survives, she'll be a hero, and a free woman. If not, she can look forward to eternity as a shambling bone-servant.

Gideon the Ninth is the debut novel from short-fiction writer, Tamsyn Muir, and this hardcover novel looks delightfully dark and decadent. Nice dark imagery of a ginger-haired figure (the only real colour to the image), dressed in black, wielding a black rapier, and donned with skull face paint and some aviator-style sunnies while standing within a mass of skeletal creatures in various states of destruction. The imagery is the definition of what would appeal to the rebellious young adult that still reads in this digital day-and-age. Beneath that dust jacket, the hardcover is all black with a debossed copper skull on the front (also wearing aviator sunglasses). The gothic aesthetic goes as far as to colour the edges on the pages, to make the book appear completely black when shut.

Looking back at the dust jacket of this book, I was intrigued by the quote on the front, from British sci-fi writer Charles Stross, who summed up the story as "Lesbian necromancers explore a haunted gothic place in space". Having had a read through, however, I can't help but feel that the quote doesn't quite do the story justice, placing an overt emphasis on the space element and that of the sexuality of the characters; the latter element which had no bearing on the story whatsoever (in fact, three of the necromancers are described as male).

The story itself is rather engaging, but it takes its time to draw you in. The universe that is being built is auspiciously ambitious, being composed of nine isolated worlds with independent methodologies, and minimal communication between them. Introducing our main protagonist Gideon Nav, while building The Ninth House, then moving on to The First House, and bringing in representatives from the other seven houses, there is more than a lot of exposition that needs to be put in place. This does make the first act of the story very cumbersome to wade through as you try to try to remember the roles and houses of each character, along with their very difficult names to remember (eg, Harrowhawk Nonagesimus, Heir to The House of the Ninth, and Reverand Daughter of Drearburgh, or Coronabeth Tridentarius, Heir to The House of the Third, and Crown Princess of Ida).

The exposition is necessary as this is in no way a real-world scenario. Every process and tradition, must be explained in the narrative in what one would hope to be an organic fashion. To a large extent, it is all handled very well. All of the names are categorised and listed in an index at the start of the book for easy reference, and characters are frequently connected to their houses when being discussed in dialogue (such as how 'Gideon Nav, the indentured servant of The House of the Ninth' will oft-be referred to as 'Gideon the Ninth' ie. the title of the novel). Despite this, the depth of world-building, tradition-setting, and motive-defining do mean the story can be quite slow to get into.

Once everything is set in place, the story jumps up a gear and becomes very narratively driven. Suddenly, the characters have aims and objectives, allies and acquaintances, mysteries and reveals. There are two main stories being told here, a history of The House of the Ninth, and the current-day story of necromancers looking to learn enough to evolve and become a Lyctor to the Emperor. Both stories are packed to the hilt with mysteries and misdirection that are gradually revealed, constantly affecting the relationship between the houses necromancers and cavaliers. The constant flux in their relationships is fully utilised by Muir and creates an emotionally compelling narrative within this sword-fighting arena full of animated skeletons and magic-wielding royalty.

There is a huge environment to explore and the geography is, unfortunately, rather ambiguous at times. While exact locations--and characters positions in relation to each other--are often unknowns, it builds tension and suspense, and the direction of the story is strong enough to overlook. Gideon the Ninth is the first of a trilogy, which will hopefully expand on this universe in greater detail in the future.

The writing style is quite easy reading and flows really well; apart from the use of a few unnecessarily flashy words that merit a trip to dictionary.com and the very long and exotic names. There is the odd descriptor that raises an eyebrow and feels a little more forced. "Colder than ten witches t*ts" is a metaphor used, that offers little explanation as to why a witches breasts would differ in temperature to any other woman. "She towered above him, a full half-head taller if you don't include the hair" is another example that feels unnecessarily elaborate and erroneous.

The amount of setup that this book has, does mean the main plot is condensed into the latter two acts and leads to a conclusion that does feel rushed. Earlier events of little consequence had greater emotional weight, and that weight seemed to reduce as the story progressed. It lessens the impact of the reveals in the climax and could have done with another 50 pages, just to allow the characters (and the readers) to take in the new information that was given; many of the book's mysteries getting overlooked in preference to the "big picture".

Ultimately, Gideon the Ninth was an engaging story that created a unique world with an aesthetic that could translate well to the big screen. While its characters were initially one-dimensional, as the story progresses, the emotional capacity of the characters grows exponentially and draws you in what is effectively a supernatural version of a whodunnit. At the conclusion, I'm left with more questions than answers, so I hope the next book is not too far off.

Two mice, Marvin and Marigold, live next door to get other. When Marvin gets cold, Marigold has to find a cure to save her mouse house. Told in Mark Carthew's classic lyrical rhyme.