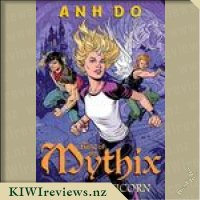 Kelly Swift is trying hard to be an average teenager, to fit in. But every day her powers are growing: she can run faster than the wind, she can hear people's thoughts, she is not normal.

When her mother is taken by the Soul Collector, Kelly can't linger in the shadows any longer. But who is she really? Can she be the one in the prophecy? Is she...the Golden Unicorn?

Keep an eye on this koala
Rating: 7.3

What do you get when one person possesses the Holy Grail and the ring of Lucifer? You get an unstoppable tyrant set on either owning everything strange and unusual or turning those people who are unique (such as a child with Heterochromia) into portraits for him to look at forever. This world is full of security cameras, the Soul Collectors own personal army and every little thing is monitored 24/7, to the point where they can even tell if your mouse simply hovered over an online link. Daily selfies are also mandatory so that any physical differences can be seen. I thought that these were a good melding of both the magic the he possesses as well as technology.

The book itself felt rather fast paced, a lot of action happens and we learn about this world rather quickly. The Soul Collector is very much a tyrant whereas Kelly is just trying to stay hidden but gets drawn into the fray because she isn't normal. I found myself wanting to know what was going to happen next but I did find that when Kelly met up with Stanley (who discovers the prophecy) that it felt too rushed so as to get to the next bit of action. I felt that this key interaction should have been slower and a bit more detailed, and Kelly takes it all far too well.

I can't say that I loved this book or would recommend it to my children when they are older, but I am interested enough that I will read the second book should it ever come out.

In Book 2 of the series, Bragonsthyme's story is frozen in time. It is up to Abigail (Spindale) and Flint to track down the story's happy ending by finding the dark master Treolle's last words, thus helping the Bloodtree to heal.

In so doing, they will ensure that the rare ice dragons live on, and reunite Flint's mother Trinket with his father Lonis, who left before Flint was born. But before Bragonsthyme has its happy ending they must triumph over the evil Rackenard, and his daughter Zezmena.