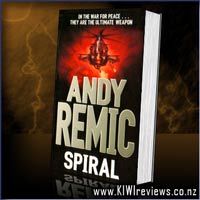 Disclosure StatementFULL DISCLOSURE: A number of units of this product have, at some time, been supplied to KIWIreviews by Penguin Random House or their agents for the purposes of unbiased, independent reviews. No fee was accepted by KIWIreviews or the reviewers themselves - these are genuine, unpaid consumer reviews.
Available:
at quality book retailers

In a future where nuclear warheads can be hidden in a briefcase...

In a world where designer plagues are held suspended in a teardrop...

Where conventional armies are powerless to defend against a single assassin, the secret organisation known as SPIRAL exists to fight a shadow war against fanatics and rogue states of every faith and political persuasion.

Remorsless, unstoppable, of every country and of none, SPIRAL's agents conduct their covert operations throughout the world in a never-ending battle for civilization's survival.

But now SPIRAL itself is under attack, and if SPIRAL falls, the world falls with it.

I have to admit here that I have kinda cheated. I got my hands on the second book in the Spiral Ops series first. There is usually something lost from a story's tense moments if you know in advance who the real bad guys are, who's going to survive the curent gripping dramatic encounter, what the REAL 'Big Secret' actually is, and all that. Usually, I find it ruins things to enough of a degree that I just go through the motions of reading it, for the sake of filling in the blanks in the story, and not really for the sheer enjoyment of throwing myself into someone else's imagination.

Thankfully, Andy Remic is a great storyteller, and even knowing the outcome I found myself getting totally immersed into Carter's world, a world of survival second to none. Even the ever-resourceful James Bond would not live more than a week in this world. A world where a single super-computer can access, well, anything and everything, over-ride any and all security and use the resources it finds as it sees fit. A world where two men, claiming the ultimate sanity, create near-unbeatable assassins and murder people in the name of the preservation of peace for all mankind. A world of weapons, in common use, that we can barely dream of. It's a terrifying world, and you just can't help but be buried in it within the first few chapters.

Setting the stage well for the second Spiral Ops story, Quake, this has to be a winner for any fan of Action-Fi, Technobuff or Virtual Soldier-in-Training. With drama, tension, blasting action, impossible deadlines, and a really nifty technotwist... this has it all, in spades.

Overall, a stunning debut for this young British teacher from Greater Manchester, well worth the effort to find and read, even if it's just from the local Library.

If you're new to Maya, the industry-leading 3D animation and effects software, "Introducing Maya" includes step-by-step tutorials and easy-to-follow explanations to teach you the basics and nuances of this complex software.

Whether you're a student or a hobbyist, you can learn all about the Maya interface and the fundamentals of ... more...