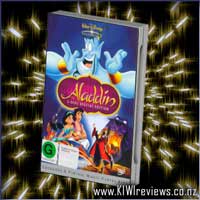 Disclosure StatementFULL DISCLOSURE: A number of units of this product have, at some time, been supplied to KIWIreviews by Roadshow (NZ) Ltd or their agents for the purposes of unbiased, independent reviews. No fee was accepted by KIWIreviews or the reviewers themselves - these are genuine, unpaid consumer reviews.
Available:
14th October 2004

Soar away on a magic carpet ride of non-stop laughs and thrills in one of the most spectacular adventures of all time! Now meticulously restored and enhanced - experience the wonders of Aladdin like never before - from the Academy Award-winning music to the unforgettable moments of sidesplitting comedy and soaring adventure.

In the heart of an enchanted city, a commoner named Aladdin and his mischievous monkey Abu battle to save the free-spirited Princess Jasmine from the schemes of the evil sorcerer Jafar. Aladdin's whole life changes with one rub of a magic lamp as a fun-loving, shape-shifting Genie appears and grants him three wishes, setting him on an incredible journey of discovery.

Enter "a whole new world" of entertainment in this astounding, fun-filled 2-disc Special Edition, featuring the deleted song "Proud Of Your Boy," games, movie secrets and so much more - it's everything you could ever wish for!

This was one of my favourite movies when I was younger because it was so much different to all the other 'Princess' movies. Of all the princesses Princess Jasmine was my favourite so when I introduced my daughter to the Disney Princesses Jasmine was the first! I think Jazmine is so much different to the typical princess in movies and seems a lot more down to earth and magical.

I love the little monkey in this movie I can't quite remember his name but he is Aladdin's little sidekick and he is such a cheeky little monkey going on the thieving missions with Aladdin and proving to be great support in the getaway missions. Aladdin is quite a mischievous character and an unlikely love match for a princess but he wows her nevertheless and they make a great couple.

Love the addition of a genie in a lamp and the magic carpet and wishes. I think young girls love the idea of magic so throw that into a princess movie and you have a pretty cool combination.

Aladdin is one of my favourite kids movies. I used to own it on VHS but since my player died long ago I haven't seen it in years. When Aladdin first came out at the movies I was childless and married to one of Robin Williams' biggest fans. He made sure we went to the theatre to see it. I wasn't disappointed. I was familiar with the traditional tale but Disney and Robin Williams give it lots more energy and fun than I imagined.

This is definitely a movie that caters for everyone. There is adult humour as well as fun for the kids. I haven't met a person that doesn't love it. The soundtrack has lots of catchy tunes that you find yourself singing along to. Warning; Some of the songs will get stuck in your head. I can't wait to introduce my girls to Aladdin and because I know they will love it I'll buy the DVD (if it is still available) rather than just renting it.

I watched this as a child and loved it i remember that i broke the vhs, so when this came out on dvd i was delighted that i could sit down and get to watch it with my daughter again.

She was totally enthralled and it kept her entertained which is hard to do with a five year old, she loved the songs and now sings each one. As an adult i find it hard to listen to some movies over and over again. But i can honestly say with this movie i didn't dread being asked 20 times for it to be played again.

It really is a family movie a classic for the whole family, it is great to find a movie that is wholesome and teaches a lesson about lying and deceiving. I would recommend this movie to any parent

As a kid, Aladdin was always one of my favorite Disney movies. I loved the songs most of all, I think, but it is one of those stories that is beautifully complete and I just came away feeling satisfied every time I watched it. It's still a movie I am happy to watch along with the children I babysit - I suppose it just doesn't have any of those annoying grating bits that so many other children's movies have.

Owning the DVD was definitely a step up from the VHS, from the cleaner quality of the film itself to the 'behind the scenes' documentaries (which I always enjoy). Aladdin is a classic for adults and children alike and one that is certainly worth having in your collection.

Having seen this on Video, I wasn't expecting anything new on the main movie. So I was impressed at the clarity of the image and soundtrack. OK, yes, we all know DVDs have better quality, but this was a drastic improvement over what I was expecting.

The story is still an enchanting now as when I first saw it, and my son is totally enchanted with it. He loves the bits where Genie is particularly silly... well, more so than usual. :)

With the bonus discas well, this had a veritable Cave of Wonders all of it's own, with special extras overflowing. Play the Three Wishes Game to have your fontune revealed, take the Genie World Tour to see the wonders of other cultures, extra Audio Commentaries, and lots more!

Overall, an excellent purchase for any parent, or anyone who still carries a sense of wonder.