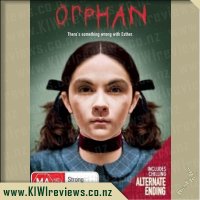 There's something wrong with Estherâ¦

Young married couple Kate (Farmiga) and John (Sarsgaard) are devastated at the tragic loss of their unborn child, a loss that has taken a toll on both their marriage and Kate's fragile psyche. When the couple decides to adopt another child they find themselves drawn to Esther, a young girl at the local orphanage. Almost as soon as they welcome the little girl into their home an alarming series of events begins to unfold, leading Kate to believe that there's something wrong with Esther-this seemingly angelic little girl is not what she appears to be.

Concerned for the safety of her family, Kate tries to get John and others to see past Esther's sweet facade. But her warnings go unheeded until it may be too lateâ¦for everyone.

This looked like it could be an interesting movie and so when my husband asked if we should hire it out that week I said yes happily enough, and I was right, it did end up being an interesting movie. Kate and John are a married couple with two young children, after Kate has lost an unborn baby and there is a strain on their marriage and her mental health, they decide to adopt but it doesn't take long before things start to go horribly wrong. Is Esther as sweet and innocent as she seems or is Kate finally loosing her mind? You end up with some rather freaky moments and a couple of gory moments but this is also a bit of a psychological thriller at the same time.

The girl who played Esther was amazing! I mean, this girl can act, she was fully believable in her role and boy oh boy was she convince able in her role. The two actors playing the brother and sister also did a really good job, these three kids out shone the adults by far and they really held the move. The plot is really well done and it was a twist that I didn't see coming so it was a good surprise there for me and my husband.