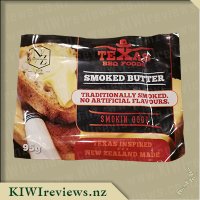 Disclosure StatementFULL DISCLOSURE: A number of units of this product have, at some time, been supplied to KIWIreviews by Texas BBQ Foods or their agents for the purposes of unbiased, independent reviews. No fee was accepted by KIWIreviews or the reviewers themselves - these are genuine, unpaid consumer reviews.
Available:
at supermarkets nationwide

We take real NZ butter and smoke it with mesquite. This gives each block a true smoky flavour with a lovely sweet finish. It's scrumptious on steak, crackers, corn on the cob, bread and works well as an ingredient in cooking. This butter is bona fide brilliant. Settle for nothing else!

Storage
•  Keep refrigerated at or below 4°C.

Deciding to vamp up a regular meal with a fancy appetizer we toasted some ciabatta buns and applied the smokey butter while they were still warm. The package was a struggle to open if it was meant to pull open. I ended up having to find the kitchen scissors to free the butter.

Overall the butter was good. It has a mild to moderate smokey flavor which is about right to be able to taste and enjoy other foods afterwards. You don't want to have the smokey aftertaste lingering when moving on to the main course.

The butter is reasonably hard coming directly out of the fridge. It's best to spread on a warm and firm medium. We originally tried to spread it like normal butter, but by the second helping we found that the thick slices were both easier to apply and better for taste. The thicker slices made for a better mouth feel as well. Even after being at room temperature for 20 minutes the stuff is still reasonably firm. This might be good for a party as it wouldn't be an oily mush after sitting out.

Overall, this is a pleasant product and did remind me of a smokey butter I had once in the States at a Texas style restaurant. So it does live up to the name Texas inspired. I wouldn't be buying this everyday, but would on special occasions, maybe to accompany or use in place of a cheese board.

I have tried many products before which are 'smoked' meats, cheeses and most recently a smoked chocolate dessert, however smoked butter isn't something that I hadn't heard of let alone tried before so when I saw this up for review I was most intrigued about what smoked butter would be like so put my request through.

When I received my butter I was surprised by the small 95gram block, as standard butter comes in a much bigger block for similar price, however I decided that this was probably due to the fact the smoked butter is more likely to be made in small batches and also that it appears to me as though it would be more of a gourmet or sometimes butter than one you would choose to use every day! The plastic packaging itself was very pleasing to the eye, with a lot more colour than most ordinary butter packages, I also liked reading that this butter did not contain any artificial flavours which are always a good sign, and being made in New Zealand was another added bonus for me also. The package I did find a wee bit difficult to open and eventually had to go and get a knife to do so, but once open I was greeted by a very smokey smelling butter which lived up to its name well!

I hadn't a clue if I had to be honest about what to do with the smoked butter but luckily there was a list of ideas on the back of the packaging. I decided to first try it on roast potatoes. After par-boiling some potatoes I added about 1/4 of the butter to an oven tray and then placed it in the oven until it was sizzling hot and melted, I then added my potatoes which I tossed in the butter. The potatoes in 40minutes were golden brown and crisp and had a lovely aroma from the butter, and better still they tasted great the whole family devoured them and said the butter made the potatoes really special.

With still a bit of butter left I sliced up a ciabatta loaf and spread the butter over each piece and then sprinkled a small ammount of tasty cheese over each slice before grilling it in the oven to make some cheesy garlic bread. Again the results were absolutely pleasing and the butter went so well with the cheese which seemed to bring out the smokey flavours even more so. I was really impressed with how such an ingredient can really change a meal.

Although this is something I would buy all the time it is something I may buy occasionally especially for special occasions or for when entertaining friends when you need something out of the ordinary to produce that wow factor.

I've tasted various smoked foods before but butter wasn't something that I had even considered might be smoked, so it was with a lot of curiosity that I opened this up. If I hadn't seen the label I would have easily known this was smoked anyways, the smell is strong and had me a little worried about how it would taste. Our first time using this I went for the tried and true baked potatoes and passed the butter around for everyone to put some on their potatoes, warning them not to put too much on since it was the first time trying it. My son didn't like it at all, asking to have sauce to cover up the taste. Of my two girls, one thought it was OK enough to finish but didn't want more whilst my youngest loved it (she would eat butter straight if I let her).

I found that after half my meal, the smoked flavour was now too strong and I struggled a little to finish my meal, so having it on baked potatoes again was not on the menu. I made some scrambled eggs and decided to add a little of this to the pan just to see how it would turn out. I found that a little bit went a long way to adding a spot of flavour to the dish, I didn't tell my kids that I had used some and they all gobbled down their scrambled eggs without complaint. This isn't really the butter for my family, we like to slather it on most of the time and found it ended up too strong, but for small amounts it added a nice little hint to the dish. 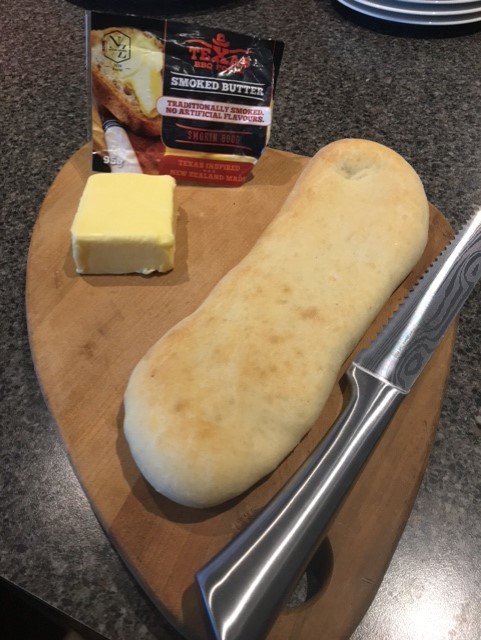 This butter is so full of flavour you can eat it on its own - not that I would recommend that, but the family and I all tried a tiny piece before using it. My daughter had made some home-made flat bread which we ate while it was still slightly warm from the oven. This really brought out the smoky taste of the butter; no other spread was needed as it was perfect just on its own. All five of us took a piece of the bread and a lump of butter and proceeded to enjoy it as an entree to our meal.

We had taken it out of the fridge an hour before serving, and were impressed that it still maintained its firm texture. Some butters will go soft and lose shape when they are left at room temperature. This butter was holding its shape but still had the creaminess of conventional butter so was easy to spread. Everyone liked it so much that my daughter said we might need to ration it next time - they were spreading far too much on their bread!

Mr Nine found it a little bit strong but we noticed that he still continued eating and appeared to be enjoying it. The three adults and Miss Seven all loved it and came back for more. We all thought it would be best with plain foods so that the delicate smoky flavour was not lost. Plain bread was good, but I had some other ideas that I wanted to try at home provided there was some spare to take back with me!

In the end, there was a small slice left so I retrieved it and put it in the chilly bin before Miss Seven could claim it! This meant I could try it out on something different next day. My idea was to see how it would go on boiled vegetables. I have potatoes growing so I dug up a root and cooked a couple of them. There was not enough butter left for more than two potatoes, but that would give me an idea of whether the combination would work. Usually I put butter with mint on new potatoes, so this was a completely new idea for me. And it worked - they were melt-in-your-mouth beautiful with a wonderful aftertaste of earth and woodsmoke. Magic!

Our one reservation with this product was the price. When you have several people sharing, a 95g packet does not go far. However, for a special occasion, it would be worth it to splash out on a pack - especially for having with an artisan bread or new potatoes. People spend that kind of money on a gourmet cheese, after all, so why not a fancy butter?