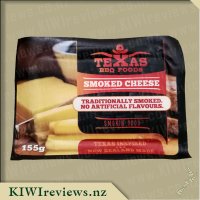 We take real NZ cheese and smoke it with mesquite. This gives it a true smoky flavour with a lovely sweet finish. It is perfect paired with crackers and is delicious in cooking, particularly in mashed potato, potato bake and many other dishes. This is the real deal. Beware of imitations!

Storage
•  Keep refrigerated at or below 4°C.

To be perfectly honest, I'm not the biggest smoked cheese fan. In most cases when I have tried it, I found the flavour to be far too strong, overpowering everything else in the meal. This is the same reason that I avoid pickles and capsicums as well. This doesn mean that I have had less exposure and less willingness to try different types of smoked cheese because of the few suboptimal experiences that I had had. But I do enjoy cheese in general, so given the opportunity to review this product without having to worry about the price of it, I decided to give it an opportunity to wow me.

The product itself comes in a nice little pack of 155g. This is a great size, as it gives the chance to try it out without worrying about having half a kilo of cheese to get rid of if you didn't like it. Especially as the price is a much dearer, the smaller size means it is less of an impact on the budget.

It is packaged very similarly to other cheese brands with the two plastic pieces sealed around it. It looks a lot like the packaging that you should be able to pull apart from the "loose" tab on the corner. Unfortunately, that didn't seem to be the case, as no amount of pulling seemed to separate the plastic and I had to resort to slicing the pack open with a knife. A little bit annoying as I try to keep the packaging as intact as possible to try maintain the texture of the cheese, seeing that I don't have a container for cheese, and they tend to harden if exposed to the air too much.

Once opened you start getting hints of aroma from the block, and it is quite nice. It doesn't smell sharp at all, which can sometimes be prevalent with cheddars. Slicing into the block with a sharp knife, the block is very easy to cut. If you start trying to cut too finely then it does start to break crumble, but that is only when you are trying to slice thinner than 3mm. In general, the cheese holds it's shape very well despite not being a very hard cheese. It seems like the smoking process has given the cheddar a consistency and texture more like a mild or edam style cheese.

Being the busy bachelor that I am, and not wanting to go shopping for ingredients, I made do with what I had in the house and made an improvised cheesy potato dish. Microwaving a selection of perla potatoes, I was able to cook them through while keeping some of the firmness. Squishing them slightly with a fork before sprinking with garlic powder, and layering some slices of the smoked cheddar on top and chucking back in the microwave to melt the cheese.

Interestingly, I walked into another room and accidentally left the dish in the microwave for a full minute before I remembered and stopped it. And yet the cheese still held most of its shape, oozing slightly, but not having the oily separation that many cheddars have after a short time in the microwave. Finishing the dish off, I sprinkled some chilli flakes on top for a little kick. the meal worked well, coming across like spicy wedges with that overly acidic feeling you get from the oils and spices of the mass produced packets of potato wedges. A great meal that took about 7 minutes from start to finish.

As far as the flavour goes for this smoked cheddar, it is much milder than I was expecting. Not overpowering at all, there is a smoothness to the flavour that actually tempered the heat from the chilli. Personally, I enjoyed the flavour. I can see how this would work very well with potato dishes, or on a cheese platter. But the price is a little prohibitive for me. If I was entertaining guests, I might spring for this product, but it certainly isn't an everyday cheese.

I love cheese it goes so well in and with everything. Smoked cheese is something which I quite often buy but always in cheese singles or in a grated mix variety that I get from my local supermarket. When I got this product for review I was quite interested to see how it would taste as it is smoked with mesquite which I have not before experienced, but as my partner have recently discovered BBQ style foods at restaurants and loved all we have tried I figured this was worth a go.

To my pure suprise Miss 6 was beyond excited when she saw I had this cheese for review, she is a child who declares she loves cheese though when given it doesn't eat as she 'doesn't like it', so when she asked for a piece I decided to go ahead and give her a small piece just in case and she loved it asking to have it added to her lunch box the next day. The cheese its self comes in an 11gram pack and for the price of $8.95 is a little on the dear side but understandable as it is more of a gourmet product rather than an everyday one. The cheese has a very rich and smokey aroma to it which hits you as soon as you open the package there is absolutely no doubting that this is a smoked cheese!

I was making some cheese puffs for lunch over the weekend and so decided to add half tasty cheese and half of the smoked cheese to the mixture. The smell as the puffs cooked was delectable and you could smell the smokiness wafting from the oven. We ate these while they were warm cut in half with a smear of butter on them and the taste was amazing, we always love cheese puffs but the smoked cheese really helped to bring out the cheese flavours more than usual.

With most of the remaining cheese I used it to make a macaroni cheese dish, again the flavours were amazing and it was thoroughly enjoyed by all of the family including my in-laws who were over for dinner, my mother-in-law straight away asked if there was smoked cheese in the sauce as she loves smoked cheese and when I said yes she asked to see the packet so that she can buy some fo her own as she loved it that much. She wanted to take the small amount remaining home but I had to say no as miss 4 had it going into her lunch box along with some salami sticks, and cucumber.

Overall this is a great cheese which I'd purchase again one day I'm sure just not as an everyday product. 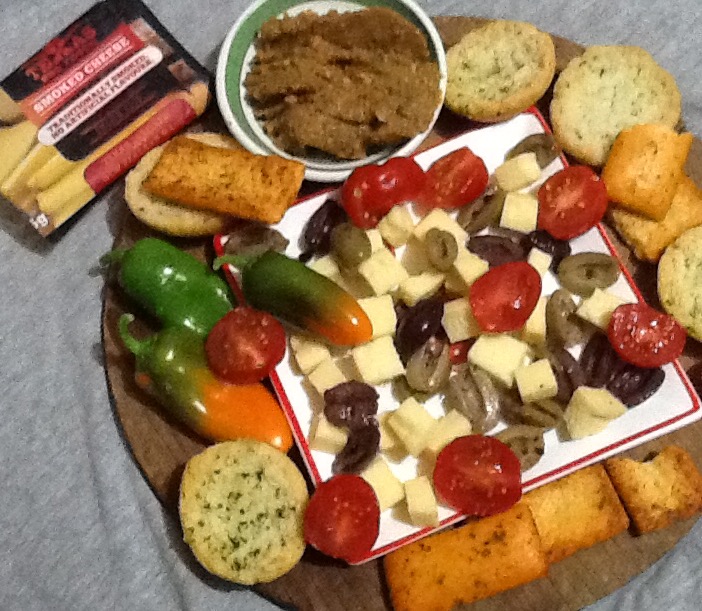 I like a good strong cheese, especially on the sort of "grazing platter" that is often handed round at parties. It makes a great finger food as it is easy to chew and does not drip all over the carpet. I was expecting dinner guests so set out to surprise them with my own platter. I already had some crackers on hand, so I added small tomatoes, aubergine and cashew dip, small whole capsicums, halved olives, and last of all the diced cheese. I considered adding gherkins as well but decided they might be a bit strong and I did not want to overwhelm the cheese.

The smoky flavour cheese comes from the mesquite wood chips which are used to smoke it. Mesquite trees are native to Mexico and the southern states of the US, so foods smoked in this way often feature in the local cuisine of these areas. It is particularly pungent - when I first opened the packet the intense smoky effect hit me immediately. However, once the cheese has been unwrapped, the effect lessens quickly - although, when I tasted it, I registered the flavour straight away. It went particularly well with the aubergine dip as the two flavours complemented each other.

When I was handing around the platter, I did not tell anyone which product we were reviewing - I wanted to get their reactions first. Two of them commented straight away on the cheese, one asking me which cheese I had used, and the other asking me to add some more cheese to the plate as he was enjoying it so much. The third person just said he liked everything, but he is a bottomless teenager who devours everything in his path, so I did not expect a critical response from him. He is too busy looking for his next refuelling opportunity!

When they had finished every item on the platter, I brought out the main meal which included a side of mashed potatoes. I still had a quarter of the cheese pack left so I grated it and suggested that everyone put some on their potatoes. This was also successful; the cheese softened when it came in contact with the hot potato but did not melt into it. The flavours remained separate, so the cheese taste still came through. There was a small amount of cheese still left at the end, but our teenager went back for seconds and demolished the lot. I guess that counts as a thumbs up from him!

All our Chutneys and Sauces contain whole fruits, vinegar and less sugars per serving. The fruit we use is grown only in NZ and all our ingredients are from NZ suppliers. Pa Hill's products are created from recipes dated back to 1910. All produce is handmade and our methods are "Back to Basics".