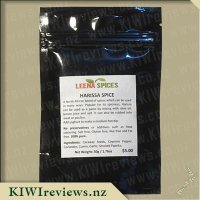 A North African blend of spices which can be used in many ways. Popular for its spiciness, Harissa can be used as a paste by mixing it with Olive oil, Lemon juice and salt. It can also be rubbed into meat and poultry. Add to yoghurt to make a medium-hot dip. I've never tried a Harissa Spice, but I'm generally a fan of spicy foods (or just food with spices) so seeing this product along side a Rogan Josh, I decided to try it. Coming in a simple resealable foil package, this product was easy to open and close, and very easy to use. Usually I'm not too much of a fan of reading the information on packaging, but I actually found it rather interesting; effectively consisting of only 6 sentences, you're provided a general overview of where the Harissa spice blend is from, ways to prepare it, nutritional information, and an ingredient list. It took me a grand total of 20 seconds to read the package and decide what I was making for dinner.

I worked with the ingredients I had, and quickly cubed up a piece of pork, before dunking it in a bowl with a mixture of Harissa spice, olive oil, a splash of lemon juice, and a crack of salt and pepper. After letting that marinade for a little bit, I gave it a quick fry in the pan alongside a dash of crushed garlic, and ate it atop a bed of brown rice. The spice paste was incredibly easy to make, and required no measurements, just guessing and throwing it all together. The Harissa spice itself is not all that spicy, but provides a full bodied aromatic flavour to the pork. Similar flavours to a spicy indian curry, but without the heat.

As a single male, I too often buy a pack of meat to save money, and end up with so many servings that I'm eating the same meat for a week in a row, so as not to waste it. Spices like this provide a quick and easy way to add variety to the otherwise bland and repetitive menu.

Opening the packet up I excitedly smelled it to get some sort of sense of what to expect after cooking the meal - the smell automatically reminded me of Indian Cuisine and so I assumed it would be rather like a curry spice - I was too afraid to try some on my finger in case it burnt my mouth and instead decided would wait to try like everyone else in the house.

I bought some chicken breast and cut it up diagonally and then halved it. In a bowl with flour I added a couple of tablespoons of the spice and gave it a quick stir. I dipped the chicken into the mixture then added it to a bowl of egg and crumbed with homemade breadcrumbs which also included a sprinkle more of this for flavouring. A quick fry and it was ready. I have been craving the Alexandra's Couscous and was disappointed when I could not find it at our local supermarket and instead found another brand with garlic and olive oil which I thought would be a nice accompaniment to the chicken.

Everybody ate it and enjoyed it and both girls asked for more chicken - but in all honesty I am not sure what the flavour was supposed to be. So this morning after scratching my head I decided to use the left over chicken and remake - this time I added the spice directly to the chicken by rubbing it in and then repeated the same process again with the flour, egg and breadcrumbs adding more spice. Again the flavour did not really pop and it reminded me of an Indian dish. I am not sure what I was really expecting but I assumed since it was North Africa it would have a different taste instead of something similar to Indian dishes.

Definitely something I am going to play around with in the future and I am excited about adding it to a yoghurt next time we have chips. Also, next time I use on a dish I might use the suggested method of adding it to olive oil, lemon juice and salt and see if that blows my mind. After checking the ingredient list on the Harissa Spice packet, I was pleasantly surprised that the mixture was not too hot for my taste. I had expected a fiery reaction when I sprinkled a small amount on to a spoon and tasted it, but it was aromatic rather than overly spicy. I could taste the coriander more than the other spices and I have used this spice in the past when cooking lamb, so I decided that my first harissa experiment would be with a lamb dish.

I mixed two teaspoons of the spice with a 150g pot of Greek yoghurt (natural), and small amounts of fresh garlic, olive oil and lemon juice, and then used it to marinate diced lamb and vegetables. After several hours, the mixture was baked on kebab sticks with the marinade poured over to baste it. I then served it to three friends without telling them what spices I had used.

It was interesting to see the result. None of them is vegetarian (I checked first!) and they assured me they were all hungry! They enjoyed the flavours and were intrigued when I said they had to give me feedback as I wanted their reactions before I told them what they just eaten.

The first friend is in her 70s and has fairly conservative tastes. I thought she might find the meal too spicy for her liking, but she not only ate it all with obvious enjoyment, but actually asked for a second helping, commenting that she liked the flavour combination. The second friend is a lot younger and enjoys ethnic food of various kinds. He too enjoyed the flavour combination and asked what spices I had used. The third friend likes most food so I just assumed he would enjoy the meal - and he did.

All in all, I was pleased with the result. I am going to try it with chicken as a dry rub some time next week (which is a method suggested on the packet) and will also try a pinch on top of scrambled egg one day. After today's experiment, I think the mixture will lend itself well to both uses. And the packet is good value: I used a fifth of the contents for this meal and that worked out at just one dollar for four people. That has got to be good value.

For Generations, Whittakers have had a passion to create world class chocolate, and now they have launched the New Zealand Artisan Collection. Combining the world's finest cocoa with the most ... more...