« The Wheel of Time : Knife of Dreams review 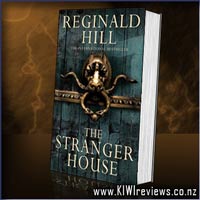 Disclosure StatementFULL DISCLOSURE: A number of units of this product have, at some time, been supplied to KIWIreviews by HarperCollins or their agents for the purposes of unbiased, independent reviews. No fee was accepted by KIWIreviews or the reviewers themselves - these are genuine, unpaid consumer reviews.
Available:
16 Sept 05

Things move slowly in the village of Illthwaite, but that's about to change with the arrival of two strangers intent on digging up bits of the past the locals would rather keep buried.

Sam FLood is a young Australian mathematicain whose grandmother was dispatched from Illthwaite four decades ago, courtesy of the Child Migrant scheme. Migual Madero, Sam's fellow guest at the Stranger House inn, is a Spanish wannabe-priest-turned-historian in pursuit of an ancestor last seen setting sail with teh Armada in 1588.

The antipathy between them is instand and mutual, but as they follow their seperate quests their paths become increasingly entangeld, with clashes physical and metaphysical, and shocks natural and supernatural, as the tension mounts to an explosive climax.

All the elements we have come to expect from Reginald Hill's writing - mystery, humour, elegant style, inticate plotting, fascinating characters, and a strong sense of history - combine here to create what must be his finest novel yet.

This was my first Reginald Hill novel, and I was unsure what to expect...
He has had some obviously good reviews from the people that count in the reviewing world, so I figured he couldn't be too bad...

They say things move slowly in Illthwaite, well, that wasn't all that moved slowly...
It took at least the first half of the book for me to get really caught in the story, but once I was, there were twists and turns abound!

Sam and Miguel are both in this sleepy village with their own agendas - Sam to find out what she can about her grandmother, and Miguel to research the regions religious history and find ties to his own family. However, as it's such a small town, their paths cross, first in the Stranger House - the local inn, and then at various points as Sam works her way through the village talking to people who MIGHT know her grandmother, and Miguel discovers the hidden religious secrets of the villages families. The animosity between the two main characters is understandable, as a mathematician and a man who has experienced stigmata are bound to differ in opinions about the world, but this grows into a mutual respect, and rather predictably, attraction as the story grows and develops, drawing the reader deeper and deeper into the secrets of this seemingly sleepy little town.

While the story starts off slowly, once it got going, I found this to be a pretty good read. Having not read any of Mr Hill's other novels I am unsure about the claim by on reviewer that he is the best living male crime writer in the English-speaking world, but he does write a interesting novel with plenty to keep a reader interested and wanting to turn the pages.

However, Ethan falls into a pond and becomes invisible, and the only one who can help is ... more...