« Who's That Roaring? review

I Got A Crocodile review 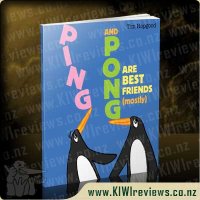 Disclosure StatementFULL DISCLOSURE: A number of units of this product have, at some time, been supplied to KIWIreviews by Scholastic (NZ) or their agents for the purposes of unbiased, independent reviews. No fee was accepted by KIWIreviews or the reviewers themselves - these are genuine, unpaid consumer reviews.
Available:
at booksellers

The cover of this book grabbed my attention with its lovely glossy illustrations of Ping and Pong on a simple blue back ground. The same colourful illustrations continue inside with very simple text and the story line of anything Ping can do Pong can do better but actually Ping could be the best friend to Pong.

I really liked the message that this book has and although the text and pictures are most suited to Miss Two the message is great for all three of my little misses. The text is simple enough for me to encourage Miss Five to try some of the words and Miss Six to read to Miss Five and Miss Two. This is an all round winner for those reasons for all of us. I enjoy reading this book and it has been a good platform to talk about what being a friend means and about being true to yourself and your own strengths.

I would recommend this book for both boys and girls and although probably aimed at pre-schoolers is great for the older siblings as well. A great addition to the book shelf.

When I started reading Ping and Pong I thought of the song "Anything you can do I can do better." Ping tries and new hobby and Pong is always better at it. We all know how demoralising it is to always come last. This affects their friendship but they find a way to move past this. I am sure that the children can relate to this too.

The drawings are very simple on a plain background which appeals to the young readers. The eyes are the focus of the penguins. The children all thought it was funny to see a penguin riding a bike. They didn't laugh at the other things none of which a real penguin would have done. I think they are really cute and would look great framed on the wall of a baby's room. The dotty end pages of the book appealed to the kids too.

The storyline is better suited to older preschoolers although the pictures are for the younger ones. Both my two year olds and my four year olds enjoyed it. Having read this sweet story I am keen to read another of Tim Hopgood's books featuring Ping and Pong "Thank you for looking after our pets."

But instead of enjoying a jubilant homecoming, they are hushed and herded to a camp far from their usual covert. Laurence soon discovers that during their time in the east, a virulent epidemic swept through the Aerial Corps and the British have lost many of their dragons. Entire ... more...