The Path Made Clear: Discovering Your Life's Direction and Purpose review 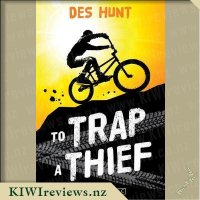 To Trap A Thief product reviews

A man who hands out $100 notes like they were peanuts.
A small-town loser robbed of a big lottery win.
A young woman held against her will.

Connor expects little from a campervan holiday with the elderly couple who are soon to be his step-grandparents. However, life gets exciting when messages arrive, sending him and his mate Harvey on mysterious missions in search of a super prize. But who is sending the messages? Connor and Harvey come to realise it is no longer a game - it is a fight for survival!

Had I not gotten this book to review, I never would have made it beyond the first chapter or two. Usually a book has some small redeemable feature but I haven't found any in this book, despite pushing myself to finish it. The main reason of feeling unenthusiastic to finish this book would have to be the fact that I didn't like a single character, not one, not even a smidge, so I didn't have anyone that I was curious about, wanted to do well or just see what they got up to. In fact, about the only time this book got any big reaction from me was when Pippi, the yappy little dog, was in danger...

The last 80 or so pages were the most entertaining part of the entire book, it was fast paced, full of action and I did want to see if the group could catch the baddies and find the end solution. However, this excitement wouldn't be enough for me to recommend the book as it wasn't entertaining till right near the end and a book should really grab you within the first couple of pages, if not the first two paragraphs. I felt the the way in which the characters were portrayed at the end didn't fit in well with how they had been during the rest of the book, it felt like a bit of a rush to give it a happy ending.

I liked that this is a New Zealand book and there is some actual travelling around NZ but as a whole, I didn't enjoy this enough to suggest it to others.

As soon as I opened this book I knew who was going to help me review it - our friends have a camper-van and a schnauzer named Pippa (almost, but not quite the same as, Rosen and Denzel's dog Pippi), so their 14-year-old granddaughter was the obvious choice. I read the book first and then passed it on to her. She was overjoyed and alternated between reading on her own and emerging from the garden to read the odd passage to her grandparents! Although she is an avid reader anyway, this book resonated on many levels for her which means it will no doubt be read several times over.

I am a fan of Des Hunt's books myself, having read and thoroughly enjoyed several of his other novels. I like his writing style; he does not dumb down his language, choosing instead to extend his young readers by including complex sentences and appropriate terminology. The setting and themes are topical; Miss 14 had travelled in the camper-van on occasion and had actually visited some of the places referenced, much to her excitement. She has even been involved in geocaching activities in one or two of them!

The story itself is fast moving, with plenty of unexpected twists to maintain reader interest. Miss 14 liked the way she kept having to change her opinion of certain characters as they turned out to be something other than she had expected. There was no chance for her to get bored; she just had to keep on reading to find out what might happen next. Luckily, it was school holidays so there were no restrictions on her time, and she completed reading to the end in record time. We had fun sharing our impressions of the book and she now wants her grandmother to read it!

There is one thing I would like to have seen expanded. Rosen, the prospective step-grandmother, was an enigmatic character who seemed to have few redeeming features apart from her love for Pippi. Both Miss 14 and I could not quite work out how she had gone so quickly from actively resenting Connor to taking him on holiday to becoming part of the family team, out to get the criminals! She even used Connor's friend Harvey's favourite putdown - "slop-pat" - when confronting the duly captured Ryan! Although it made for a happy-ever-after ending, at least in terms of her relationship with Connor, it was a huge turnaround for her and much of the process was implied rather than detailed. This meant we had to backtrack in the book several times to see what we had missed.

But apart from this reservation - and it is certainly a minor one - we both found this an excellent read. Miss 14 has carefully inscribed her name and contact details in the front cover as she wants to make sure to get it back if anyone happens to borrow it! (She was no doubt thinking about her grandmother who is now sufficiently intrigued to want to read it for herself!) And Miss 14 is looking forward to reading more Des Hunt books in the future.

With seconds to spare, Cal escapes from the burning wreck of the Orca. Helicopters search from the sky, while Oriana's thugs chase on foot. There's no time to think about his dead great-uncle - Cal must dodge the cops and crims, and return to his pursuit of the Ormond Jewel.

Convinced Sligo has the Jewel, Cal embarks on a dangerous break-in mission to retrieve it. He hopes it will give him the answers he needs, but what if it reveals ... more...