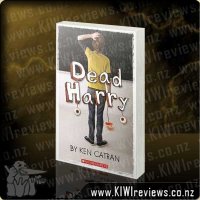 Sam has a problem. His best mate, Harry, has been killed. And now Sam, too, is in danger - but only Harry can help him ...

Sam's best friend Harry is working on a school assignment about refugees from the Balkans, and comes across a photo of the school caretaker as a war criminal. The next thing he knows, Harry is dead and has returned as a ghost to help Sam solve the mystery of his murder. The boys, with the help of the class geek Anna, uncover an operation centred at their school, involving giving war criminals protection in exchange for big bucks.

I decided to start reading Dead Harry last night around 10pm. BIG mistake on my part. This book draws you in from the first few pages. The action is almost immediate.

The language is clear and easy to follow. Written from a teenage boy's perspective, some of the sentencing feels clumsy but natural for our character. He makes judgements on other characters which aren't always kind, but seem normal for his age.

There are three main characters in the book and we get to know them quite well. The rest of the characters are mostly 2 dimensional. With 130+ pages though, there wasn't a lot of time to explore every character.

The ending was a bit of a surprise to me. Which was good. It wasn't predictable, and that's all I ask. The imagery in the book was excellent. Spooky things happen, but its described in a way that isn't too gross or scary.

There is no real magic in this book, but it covers the supernatural. There's a lot about ghosts and what they need to do to pass over. It remains pretty secular though. I've marked slightly low on price because it is a short novel, and could have been cheaper. But in reality, I would pay that for the entertainment value of the book.

My husband came to bed at midnight and I was on page 114. He asked why I wasn't asleep yet. One more chapter was my response. But really, I knew I wouldn't be able to sleep soundly without finishing the book! And I did finish it too. A quick, but excellent read.

In this classic Seussian tale, the good doctor primes his readers against all the little mishaps and misadventures that can befall even the best of us -- from bang-ups and hang-ups to lurches and slumps -- encouraging us to take life in our stride!

With his unique combination of hilarious stories, zany pictures and riotous rhymes, Dr. Seuss has been delighting young children and helping them learn to read for over fifty years.