ProdID: 5881 - There was an Old Bloke who Swallowed a Present
Author: P Crumble and Louis Shea 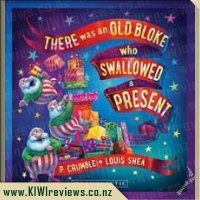 There was an Old Bloke who Swallowed a Present product reviews

The old bloke has swallowed one of Santa's presents! Keep an eye on your Christmas tree and guard your stockings because now he's on the hunt for more Christmas snacks!

I had noticed that the book was available for review and thought that it would be good for the kids. I obviously know "The old woman who swallowed the fly" and was interested in seeing what would happen and how it would all turn out.

First thing I noticed was the cover was holographic and showed the kids how if you held the book up and then slowly moved it a bit you can see the old man climbing the tree and the present falling but when you look more closely you see a bit more of the picture. The story itself was easy to read and the pictures were great and eye catching, the kids spent ages sitting near me and pointing out what they could see and discussing what the pictures were showing. I was rather surprised that they even noticed that the gingerbread man had an unhappy expression and gave their thoughts on why the gingerbread man would be unhappy.

I had to read it three times in a row and still had the same kids asking if I could read it again as they really enjoyed the story. One question that was asked is why was there no CD to go with the book but when they saw the pictures they forgot about having no CD.

This book is a definite keep and read again over and over, the words were easy to read and the story was easy enough to follow and for kids who can't read yet the pictures are an easy way for them to guess the story.

I would be interested in reading the other books in the series.

When I was given this book to review I was unaware that there were a few of these '....who swallowed....' books by P Crumble and Louis Shea. I love the traditional story/song about 'There was an Old woman who swallowed a fly' so thought having a Christmas themed one was quite clever.

When you begin to read this it flows quite nicely, however a few pages in this changed and did not flow quite as easy. It is hard to explain but some of the lines that I feel were meant to rhyme, did not. Looking at this further however with my child we did find that although the lines did not rhyme that the author had used similar spelling patterns.

The illustrations in this book are very vibrant and have lots to talk bout. I like books that have new things/words to talk about as this expands kids vocabulary. The front cover is catchy with a hologram picture that my son enjoyed watching the present fall over and over again.

Overall I do like this book from a teaching point of view, however as just a book to pick up and read at bedtime, this is not one I would choose. I am keen however to find other titles of this set to see how the author has used rhyme. The one I am most keen to find is 'There was an Old Lady that swallowed a meerkat'.

The town of Río Fugitivo is on the verge of a social revolution - not a revolution of strikes and street protests but a war waged electronically, where computer viruses are the weapons and hackers the revolutionaries.

In this war of information, the lives of a variety of characters become entangled: Kandinsky, the mythic leader of a group of hackers fighting the government and transnational companies; Albert, the founder of Black ... more...