« Rise of the Jain 1 - The Soldier review 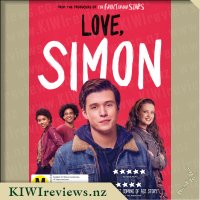 Everyone deserves a great love story. But for seventeen-year-old Simon Spier it's a little more complicated; he's yet to tell his family and friends he's gay and he doesn't actually know the identity of the anonymous classmate he's fallen for online. Resolving both issues proves hilarious, terrifying and life-changing. This is a funny and heartfelt coming-of-age story about the thrilling ride of finding yourself and falling in love.

This movie is based on Becky Albertalli's young adult novel Simon vs. the Homo Sapiens Agenda, and stars Nick Robinson as Simon.

I was trying to decide which category this movie should fit into: comedy or romance. In fact, it has elements of both, and I suspect a comedy tag will draw more interest than a romance, so the decision was made! I found this a totally charming film - not great theatre, but the sort of story that has that essential feel-good quality which ensures it will appeal to a wide range of people. I did wonder at the M (mature audiences: 16 and over) rating on the grounds of offensive language and sexual references since the target audience would include teenagers much younger than this. Personally, I did not find anything objectionable. The USA has given it an R13 rating which I think is far more realistic - there is very little inappropriate language, and not one explicit sex scene.

The themes of the story are the universals of friendships, wanting to fit in, trying to make sense of one's own place in society, teenage first love, and the role of social media in the lives of youngsters today. Add to the mix the challenge of being gay and being accepted by one's family, and you have the basic storyline of the movie. The references are topical: Trump is president and Obama is yesterday's news, so the story is placed firmly in its context of time (2018) and place (Atlanta). However, the themes are perennial, so those references should not be enough to date the film.

I like the way that the two main gay characters, Simon (Nick Robinson) and Ethan (Clark Moore) are portrayed as two very different people. (Blue, the third gay character, exists only as a cyber contact until the very end.) Simon is the original all-American boy who does not look or act any differently than his straight friends whereas Ethan is much more feminine and is completely open about his sexuality. When the two boys are bullied by two other students, the headmaster calls them all to his office to make the bullies apologise for their behaviour, but he mistakenly assumes that Simon and Ethan are partners because they both just happen to be gay. The director has deliberately chosen to include this sequence to illustrate for the audience that there is no one gay stereotype: there is just as much diversity in the gay as in the straight world, and attraction is just as individual!

There are some nice touches in the staging of the film. In one sequence, where Simon is pondering on his own sexuality and all the students dance dressed in an assortment of rainbow clothing, Simon is the one student in light blue - which is not a rainbow colour. This makes him stand out as different but this time the difference is reversed! I also liked the idea of the school production being Cabaret because this is a musical that features characters who are sexually fluid and who are often hiding who they really are.

As Simon, Nick Robinson is a sweet boy who makes the audience determined that he should have his happy ending. Anything less would be selling him out! Others of the cast worth mentioning are Jennifer Garner and Josh Duhamel who are almost too good to be true in their acceptance of their son as he is. Reality hits however as Ethan mentions several times that he has found it hard to be out, although he does not elaborate in detail on how his family has reacted. I would like to have seen more of Ethan and learned a little more of his back story. Simon's friends Leah (Katherine Langford), Abby (Alexandra Shipp), and Nick (Jorge Lendeborg Jr) provide a strong backup cast as they dump him as a friend and then realise that they want him back again as part of their circle.

For any young person struggling with his or her sexuality, this is an affirming film which aims to normalise differences - not only sexual identity, but racial, religious and social variations as well. The DVD includes a collection of short videos, some of which include interviews and commentary by Becky Albertalli (who wrote the book that inspired the movie). These bonus films include some interesting perspectives on the film by some of the cast and crew, although it is best to see the film first as there are spoilers included! Overall, I enjoyed the film and the youthful exuberance of the actors if at times I felt quite out of breath at the energy they displayed in some of the scenes!

In the dead of a Wyoming winter, a bounty hunter and his prisoner find shelter in a cabin currently inhabited by a collection of nefarious characters.