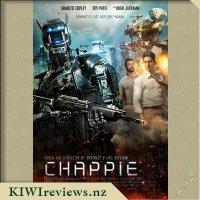 In the near future, a mechanized police force patrols the streets and deals with lawbreakers -- but now, the people are fighting back. When one police droid is stolen and given new programming, he acquires the ability to feel and think for himself. While the robot, dubbed "Chappie (Sharlto Copley)," puzzles out human behavior, the authorities begin to see him as a danger to mankind and order; they will stop at nothing to ensure that Chappie is the last of his kind. This was a bit of a mediocre film for me. The premise was certainly interesting, having a police force comprised of robots with artificial intelligence (AI). It seems to be a logical progression with the way that AI is progressing and advancing automation in the real world. With the widespread use of autonomous drones internationally, it's not a farfetched idea. Of course this premise also includes the new program that can learn and adapt, like that of a human child.

While this seems like a great plot for the film, it didn't really hit the mark, in my opinion. It was certainly fun to watch this character grow and learn, and to see how the variety of influences affected how it learned, the character voice inevitably became irritating. This combined with a lack of real learning without direct human involvement, made it seem like it would have been a lot easier to have just programmed him, instead of having to teach him.

As the film progressed, the villains became apparent (who would choose to have a mullet, really), and the plot became more and more convoluted. I honestly preferred the first half of the film. I was surprised a bit at how it progressed, as it moved in an unpredictable fashion, but it went in a direction that didn't really appeal to me. I had some friends that absolutely loved the film, and were in tears at times. But I also had friends that got bored and started playing with their phones. So it's a hard film to categorise.

HINDENBURG is a brooding and powerful drama-documentary that explores the iconic disaster against the strange world of the many characters who were aboard.

It tells the Hindenburg's story from its launch to its final voyage and spectacular demise, and reveals the fatal flaw that led to its destruction. The film accompanies the characters as they set out on this infamous last trip, exploring the airship through their eyes and experiences.