Home > Categories > Movies > Family > The Legend Of The Guardians: The Owls Of Ga'hoole review

ProdID: 2775 - The Legend Of The Guardians: The Owls Of Ga'hoole
Director: Zack Snyder 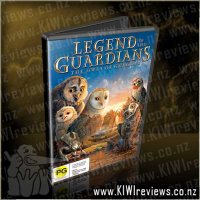 The Legend Of The Guardians: The Owls Of Ga'hoole product reviews

The film follows Soren, a young owl enthralled by his father's epic tales of the Guardians of Ga'Hoole, a mythical band of winged warriors who had fought a great battle to save all of the owl kind from the Pure Evil Ones. While Soren dreams of someday joining his heroes, his older brother Kludd scoffs at the notion and yearns to hunt, fly and steal his father's affection from his younger sibling. But Kludd's jealousy has terrible consequences - causing both owlets to fall from their treetop home and right into the talons of the Pure Evil Ones.

Now it is up to Soren to make a daring escape with the help of other daring young owls. Together they soar across the seas and through the mist to find the Great Tree, home of the legendary Guardians - Soren's only hope of defeating the Pure Evil Ones and saving the owl kingdom.

The story line and the plot is nothing new. Good vs Evil, best friend/family member turns into an enemy. In saying that, the imagery is beautiful and I rather enjoyed the characters.
The movie itself did feel slightly rushed, that sense of urgency to get you to fall in love with certain characters, but at the same time learn as much history as you can, was unfortunately always going to be there and is inevitable when trying to take a couple of books worth and compress them into roughly two hours worth of screen time.
Should it be on at the movies again I wouldn't spend the money on going to watch it, but we did buy it on DVD for my 4 & 2 year old children, who love the movie.
It holds their attention and fires my sons imagination.
I may not want to see it more than twice a year, but it's good to know that it has shown to be worth it's money when it comes to my children and their enjoyment of it.

Talking Owls in helmets, ready to do battle in metal claws... starting to sound a bit like C.S Lewis's Narnia stories in a way. Amongst stunningly smooth animation with beautiful, well detailed scenery (even the owls, right down to their tiniest feathers), you will find a storyline that will capture the attention of the young (and some of the young at heart) with its adventure, friendship, heroes, villains, and of course the big battle. Pretty much your standard adventure/fantasy type kids' movie really. The soundtrack, featuring Owl City's song "To the Sky" as the theme song, is enjoyable to listen to, and the extra features (a Looney Tunes cartoon "Fur of Flying", and an interesting and very informative look at the world of owls in True Guardians of the Earth, hosted by "Digger" and Modern Family's Rico Rodriguez) are worth checking out, although I wish the kid had slowed down his talking a little, so I could actually understand him properly.

Other than the visuals, music, and extra features, I found this movie to be rather lacking in the "worth checking it out" department. The storyline, while enough to entertain youngsters 8 years and younger (and maybe those older who are just after a fun movie that's really no more than mindless "eye candy"), will be hard pushed to keep the interest of any who want a decent story with characters you can relate to, a storyline to grip you right until the very end, or even some decent comedy (why did they have to make Digger so ditsy and silly? Is this really where the "funny" side of kids' programs is heading these days?). It felt rushed, with most of the "main" characters' pasts barely given a proper look, making it hard to really get to know them, and just over all, not a movie I'd go back to watch again.

Also, a word of warning to those who have read the books... the plot from the books has been completely muddled up in this movie, with several characters either barely introduced (Otulissa for example), left out altogether (Martin, Hortense, the Bald Eagles, etc), or just completely changed (I soooo prefer the far deeper and more interesting version of Digger in the books!).

In summary, if you've got kids 8 and under or are just after something visually appealing without a storyline that really requires much thought, then this could be worth checking out. If you've read the books, or want a decent storyline, then I'm sure you could find better movies out there. Not impressed.

In the future they will invent time travel, but it will be illegal, and only the crime syndicates will use it. what better way to hide a body than to send it 30 years into the past?

Joe (Gordon-Levitt) is a 'Looper', one of the best - a hired gun recruited by the mob to do one thing, wait for a target to be sent back in time, make the kill and dispose of the body. He's getting rich and life is good, until one day the ... more...