« The Short But Brilliant Career Of Lucas Weed review 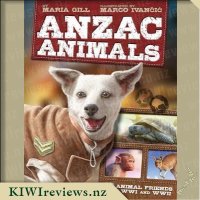 What do kangaroos jumping around Egyptian camps, monkeys swinging from masts, dogs ducking for cover, and camels chewing their cud amidst the sound of gunfire have in common? They went to war!

Who knew our soldiers had such a variety of animal companions in the two world wars? Apart from the "beasts of burden" that one might expect, such as horses, mules, donkeys and camels, many battalions had mascots as well: kangaroos, monkeys, dogs, chickens, tortoises, cats ... all of whom provided comfort, companionship, and a welcome distraction from the war. 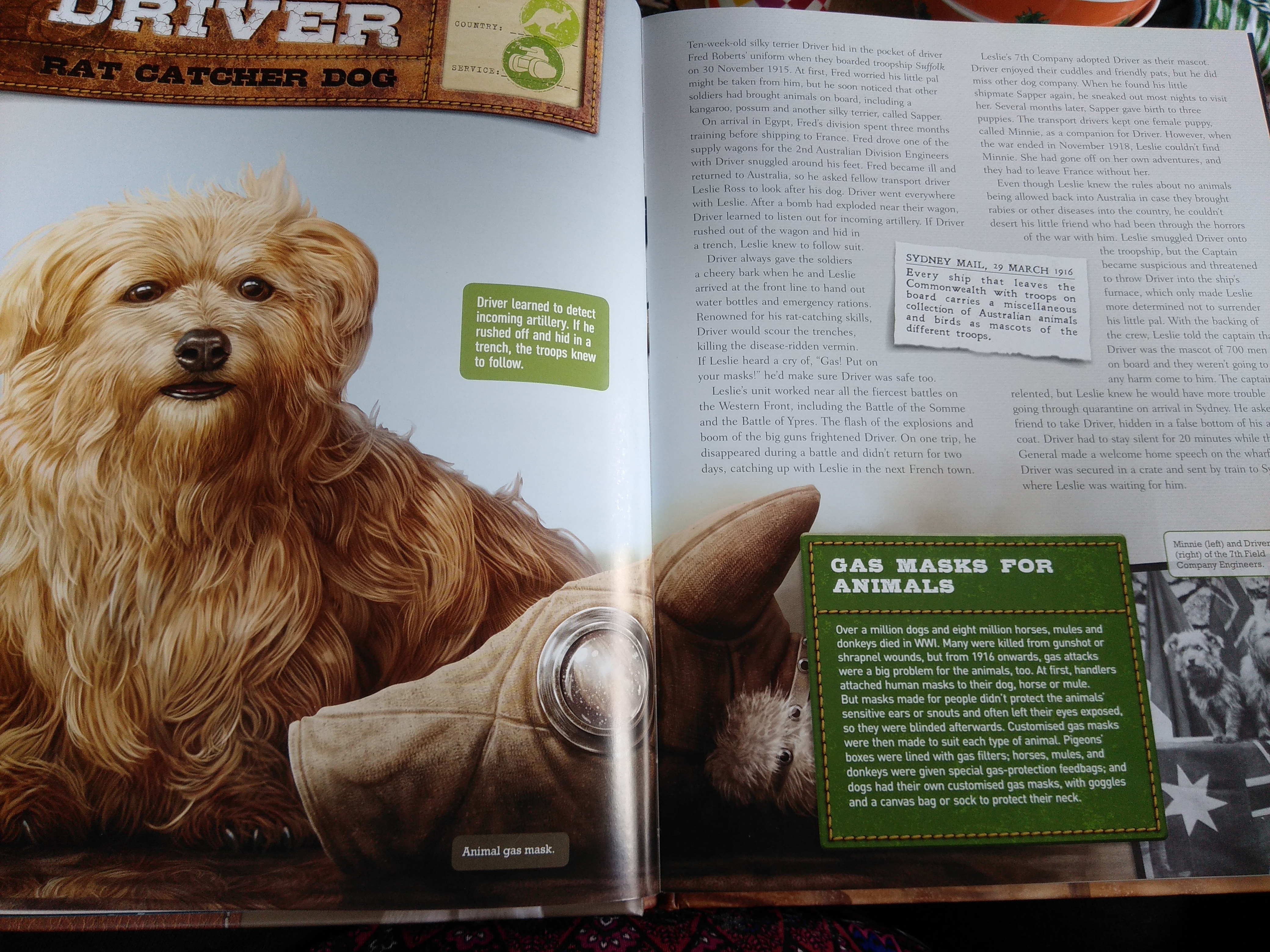 We've all heard tales of the heroics of different people during World War One and World War Two, the risks they took, the lives they saved and the way they faced adverse moments. This book introduces people to twenty or so animals who provided aid during the wars either by way of sending messages, helping soldiers or simply being a beacon of love and happiness during a very trialling time. The contents pages give the usual information about what to expect but also provides the handy guide to knowing which symbol represents what.

As with any ANZAC book, it is a mix of New Zealand (kiwi) and Australian (kangaroo), as well as giving us animals from the army, Air Force, navy and medics. Each one has a symbol which is used on each of the pages for an easy guide and was something that my ten, eight and seven years olds picked up easily. The two world wars are in two sections, again, making things easy to follow, and at the start of each there are maps. The maps provide a visual of where the battles took place as well as letting us know allies, major battles and so on. Following that there is a timeline showing us where in history these animals are placed.

Each animal gets a two page spread combining wonderful illustrations of the animals, original photos where possible, small exerts from original news articles and a small box of info about other animals and moments. There is then a good amount of information telling us about the animal, how it began its story as part of the war effort, what it did or went through and where possible, where it ended up when the war was over. Each makes for a nice sort read, the content isn't too 'heavy' and it gives good insight into the animal war aid.

I'm glad to have this as part of our book collection, it's been very well put together and provides a good learning opportunity.

My 7 and 9 year old daughters absolutely love animals so I thought ANZAC Animals would be a great read for them to demonstrate how important animals were during the War. ANZAC Animals is a stunning hardback book which features the stories of 20 animals and their roles during the war.

The contents page is very helpful and breaks things down between World War 1 and World War 2. There is a basic but detailed map for each World War that highlights the countries involved and the major battles that occurred. Whilst I found this really interesting, my 7 year old didn't! My 9 year old had just finished some homework on maps and timelines so she was interested looking at the Key and the Timelines which mentioned historic moments and the animals that would feature in the book.

Each animal features over a two page spread which shows the Country and Service they represented. There is a lot of text but there are different coloured text boxes and snippets from newspapers that help to break it up and appeal to the younger reader. There are also a lot of black and white photographs that I really liked looking at which showed you what life was really like for the people and the animals. One of the standout features of this book would have to be the stunning illustrations by Marco Ivančić. Both my daughters loved looking at them and they were bright and colourful and all appeared incredibly lifelike. If it wasn't for the fact that these illustrations were in colour, you would think they were actual photographs!

ANZAC Animals is a heartwarming book that warrants a place in every Australian and New Zealand home. You can see that is has been extensively researched and there is a huge amount of historical information within the book that is a great research learning tool for our children (and adults!) I thought this was also a gentle introduction for younger readers learning about World Wars 1 and 2. My daughters thoroughly enjoyed looking at this with me and said afterwards that they hadn't realised that animals had played such an important part in these battles. I highly recommend it.

On 29th October 1998 the front page of the New York Times reported that an extremely ugly, unprepossessing book had just been sold at Christies New York for us$2,000,000. It appeared to be the battered prayer book of a medieval priest, charred by fire, doused with water, and devoured by mould. Yet underneath the prayers, barely visible below the stains and the soot, lay hidden the oldest surviving manuscript of the ancient world's greatest ... more...