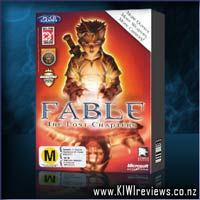 Disclosure StatementFULL DISCLOSURE: A number of units of this product have, at some time, been supplied to KIWIreviews by Microsoft for the purposes of unbiased, independent reviews. No fee was accepted by KIWIreviews or the reviewers themselves - these are genuine, unpaid consumer reviews.
Available:
at quality software retailers

Expanded Content: Discover additional regions, storylines, and side-quests as well as new optional missions. More spells to master, new armor and weapons and new monsters to use them on too!

Coraline: Beware the Other Mother
Rating: 7.8

After playing the Xbox version to death, and FINALLY learning how to sneak past the pirates guarding the gates, and find the seeress... (believe me, that was a real mission for a character designed NOT to sneak around... shoot them, chop the gates to kindling, punch rocks into sand...yep, sure can... but not skulk in the damned shadows while dragging a glowing, flaming sword that throws lightning bolts!) I was kinda sore in the old hands from hammering the controller to near-death... so it was great to see this come out on the PC a year after the Xbox version can and brightened our nights.

The keyboard controls take quite a bit of getting used to, and I found that if I wanted to cast magic during a swordfight, I had to almost cross my arms to reach the correct keys on the right side of the keyboard while frantically clicking like mad on the poor mouse... however, the fancy mouse stood up to the abuse with ease, and it's ultra-high resolution made the gameplay quite smooth and easy.

Once you have the controls down pat, you'll find the game quite easy to play, and so similar to the Xbox experience that you'll not regret not owning one... after all, if you did own an Xbox, you'd buy that version for half the price second-hand. However, if you did that you would miss out on all the extras the PC version offers, such as the extra quests, storylines, missions, etc. These extras really do allow it to be a totally new game, even to an experienced player. Similar enough to keep you on the main track, but with enough new stuff to keep you guessing in places.

I was really impressed with the array of new nasties to slice, dice, shoot and zap into oblivion, plus the range of new armour... well... let's just say I went a little crazy at the trading stalls and had to give Death the nod in passing on a few occasions to raise the gold to buy the drool-worthy toys.

I also really enjoyed making a set of customised tattoos, which you naturally can't do on the Xbox version. The game manual includes the basics of how to create your own, and in the directory it specifies you'll find a text file with all the details. it's amazingly simple, and I just used some clipart I had lying around on the hard-drive (apologies to the author of the image I used for the back, I have no idea where I found it, but I lay no claim to it.) and tweaked it all around in Photoshop and suddenly, it appeared as a customised tattoo in the game, and at a cheap price too!

It is now nearly 2am, and I have been playing for about 14 hour solid... I need sleep... I need it bad... but I just couldn't stop... it was like my hands were ignoring my fore-brain and listening only to the warrior residing in the hind-brain, which was screaming "KILL IT KILL IT KILL IT" every time anything onscreen gained a red glowing halo... and -blush- a few green ones too. Not supposed to do that... but they were annoying me, asking the same questions even if I walked past them!

Overall, this is a brilliant boosted-portover, and I would love to see the expanded content available for download when the Xbox360 arrives... this would step up a few dozen grades indeed. A couple of VERY IMPORTANT NOTES however...
•  If you are running a Windows-skinner like 'WindowBlinds', Unload it before you start the game or it WILL crash on load. Most annoying.
•  If your system has onboard sound, invest in a high-end soundcard... not only does this eliminate one of Fable's compatibility glitches, but the added sound quality adds significantly to the gameplay. Subtle cues become easily heard.
•  If you are running an nVidia 6800 series videocard, expect 'issues', especially if you are running a 6800-Ultra... up-to-the-minute drivers ARE required.
Other than that, install all 4 CDs, and spend the night getting evil looks from the cat, the dog, and the girlfriend (if you have one... you non-'leet geek you!)

Flight Simulator X immerses you in a beautifully rich and realistic world with dozens of aircraft and interactive Missions for a completely new and innovative gaming experience. Free Flight lets you fly anywhere in the world, from your hometown airport to the most exotic places ... more...