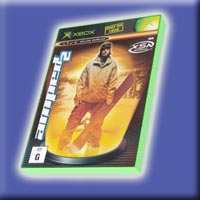 Disclosure StatementFULL DISCLOSURE: A number of units of this product have, at some time, been supplied to KIWIreviews by Microsoft or their agents for the purposes of unbiased, independent reviews. No fee was accepted by KIWIreviews or the reviewers themselves - these are genuine, unpaid consumer reviews.
Available:
Now

Get amped for THE freestyle snowboarding experience. Ride with the first truely virtual snowboard pack on XBOX.

Only Amped 2 has snowskate with kick flips, shove-its and more.

Ride with your crew or challenge the world on XBOX LIVE!

Features:
- Become a world-famous freestyle legend with the superstar career mode. Over 200 new challenges take you from famous North American mountains to Switzerland, Australia and New Zealand.
- Biggest bag of tricks ever, including new aerials, grabs, rail slides, tweaks, lip stalls and more. Combo tricks together for bigger points and more fame with new 'butter' tricks.
- Maximized multi-player, with modes that let you compete for bragging rights on www.XSNsports.com. See where you stand with regional and worldwide stats and rankings.

Over 300 fresh, new indie songs. Amped 2 means freestyle, and freestyle means riding your way: agressive with combos, or smooth and stylish. Challenge the best in the world or just ride with friends on the most tricked-out, realistic, online mountains ever created for XBOX.

Ok let me just start off by saying i'm not a great fan of sports games, but after trying my hand at SSX Tricky on the PS2 I had to see what the XBox had to offer and i'm afraid it didn't quite grab me the way the PS2 offering had, but that's not to say this isn't a good game.

It has enough variation to differentiate this from it's competition, and the graphics and sound have to be second to none. But the difficulty level is a little too steep fo me. But if your into sports games go get this one.

OK, I simply must start of by admitting that I am not really a 'games' person, so it has to be something special to really engage me, and sports games have the hardest job of all, since I LOATHE sports in general. And when it comes to snowboarding, SSX Tricky is the only one to really grab me.

Now, after that sort of lead-in, you could be forgiven for assuming I was about to roast this game. Far from it! The replay factor had me surprised. I found myself playing the tutorials almost non-stop for an hour, just so I wouldn't faceplant so often on the main slopes.

The gameplay is quite difficult to master, the tricks are not as simple as a key-combo, they require you to 'flow' through the entire move with the controls. And you can add 'style' by utilising the triggersm to even out rough handling of the control, giving you much higher scores... IF you can master using the thumb-sticks without going to full-lock on them. Partial pulls gives smoother 'flow' and thus higher style points.

The addition of on-track obstructions, such as debris, media photographers and hidden snow-drifts add a level of realism lacking in any other snowboarding game I have seen. Your score is based on a number of factors, including 'Media' - If you put on a show for the media, your score increases greatly. When you see a flashing red camera icon, you know that there is a camera aimed at that spot. Pull some air and spin a few tricks out for some serious point bonuses. Also the on-track photographers will call out to you to let you know if they are impressed with your moves. "Hey, how do you spell your name" indicates some serious kudos are headed your way, but don't plant yourself, or you lose not only trick and style points, but media score too.

With the first truely freestyle engine I have experienced, this game gives you almost unlimited freedom. There are few limits to the tracks you can take (attempting to fly off a 200 foot cliff and expecting to survive the landing is just plain stupid!) so enjoy it. Pull some air, grab your pride in one hand and your board in the other and show the world what you are made of!

With XBOX Live enabled, I forsee some SERIOUS competition going on when you score this game. Being able to run in a pack made of players from around the globe, in near-realtime, will add levels to this game you just won't find anywhere else!

Overall, a brilliant addition to the XBOX range, and one I anticipate will go Platinum in no time flat. Well worth the purchase price of $99.95 +/- (depending on retailer).

A nail-biting game of deduction that will have everyone shouting.

Your objective: To envision and move just ONE piece to recreate the same pattern of coloured play pieces on the Game Board as the Vision Cards laid out around it.