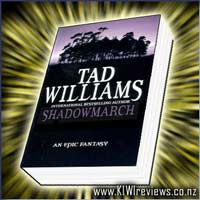 Disclosure StatementFULL DISCLOSURE: A number of units of this product have, at some time, been supplied to KIWIreviews by Penguin Random House or their agents for the purposes of unbiased, independent reviews. No fee was accepted by KIWIreviews or the reviewers themselves - these are genuine, unpaid consumer reviews.
Available:
3 December 2004

The stillness of the hall is broken. A rising murmur fills the mirrored room, a wash of voices that grows until it echoes in the dark, thorn-carved rafters. The blind king nods slowly. 'NOW, at last, it begins.'

At the uppermost edge of the northern kingdoms, its towers shrouded in mist, lies Southmarch Castle. For hundreds of years it has remained hidden from the affairs of empire. Now its isolation can protect it no more. Southmarch is under siege.

In both the twilight world to the north and the Autarch's empire to the south, armies are gathering. And it is to Southmarch that they will come: to the royal twins, left to rule as best they can in the absence of their father; to Ferras Vansen, captain of the royal guard, whose passions run deeper than those he protects could imagine; to Chaven, the physician, a man whose skills are rare indeed; and to the Funderling, Chert, who finds a child abandoned in the forest - a child whose destiny will take him into the very heart of the shadow...

AHHHH Tad you did it to me again.
If you've read Tad Williams' books before then this on will be no surprise in its layout, just like the 'Dragonbone' series and 'Otherland', Tad uses the first book to set everything up. Characters are introduced, romance and betrayal lines are hinted at and history is built to the point where you know the characters intimately.
Yes this does make the story drag a bit and you get about half way through and think well where's the story? BUT, it is all worth it, maybe not in this book, but this is a series so you cannot expect it to be flash and bang.
Tad's writing style is one that, while hard to get into, you do remember it. The world, characters and plot is embedded in your head without it being hammered in there.
I recommend this book as it is the start to what seems to be a great series and the last few pages leave you with the "Hang on, what happens now??" that makes you want to get the next book.

I really found it ridiculously hard to read this book. It dragged on - alot. Normally I don't mind Tad Williams but this particular book was really difficult to get into.
The characters were hard to get involved with, the plot was confusing, and both the dialogue and the writing style were quite stilted.

So you may ask - what did I actually like about this book?
While the writing style was stilted around the character's emotions and dialogue, the descriptions of the characters and their surroundings was simple yet effective. As usual Williams was able to inspire detailed visions with just a few well placed words.
The appendix is really quite comprehensive, which is a nice change...
And the book does warm up. By the end you like the book, the writing and the characters have warmed up and you have a better idea what is going on. But it does lack that initial hook.

Essentially? If I hadn't been reviewing this book I would have given up on it.

To be honest it took me forever to read Shadowmarch. Ok, not literally forever, but actual months. I think that says a lot. Sure, the book was long, but so was The War of the Flowers. I'm not opposed to reading long books. I wasn't even opposed to reading Shadowmarch. My problem is that I need charisma, I need hooks, I need stories that make me want to curl up and keep turning those pages. Unfortunately Shadowmarch lacked that necessary literary charisma, it just couldn't grab me, shake me, and make me NEED to read.

That is not to say that I thought it was a bad read. As far as stories go it was adequate. For people who adore the genre I'd recommend this book. It has the fantasy trappings, it has moments of promise. It's not bad. Not bad, but not exactly great either.

When I read I need to relate, to empathize, to be drawn into this literary reality. And that's where Shadowmarch lost me. The characters were promising, but somehow the impact of the characters was minimal. I was struck by this feeling that I could have gotten close to the story but there was an awkwardness that stood in my way. The concepts were good, the characters were interesting, but somehow that cohesion and charisma that is necessary for my need to read, to experience the story, just weren't there.

I got the distinct feeling that this was a scene setting book. An introduction of characters and scene. The central characters are covered well. We get a story in Briony and Barrick, the virtual child regents, thrust into power after the death of their brother. We get insight into their world, and eventually a war. Snippets of intrigue are included. As are chapters that only make sense in a background making sense. As a result the story ends up a little bit too choppy for my taste. A little bit too vague. This, combined with a rather dry storyline, left me feeling slightly cheated.

That said, it would be interesting to read the books that follow and see if my opinion should be revised. But right now I'm left feeling just a little disappointed. The most clear statement I can make is that if I enjoy the next books I'll probably have to go back and read Shadowmarch again.

So, if you're a Tad Williams fan, read it. If you want to get into the set of Shadowmarch books, read it. But if you're just looking for a story to grab you when you feel like curling up with a book, look elsewhere.

Unravel the mysteries of the mummies from acient Egypt to the Artic with this unique combination of book and website.

e.explore Mummy gives you eveything you need for school projects and homework, on and offline.

•  Go to the live and updated website specially created by DK and Google at ... more...