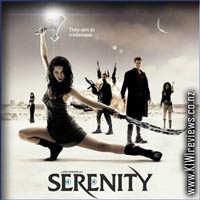 The film centers around Captain Malcolm Reynolds, a hardened veteran (on the losing side) of a galactic civil war, who now ekes out a living pulling off small crimes and transport-for-hire aboard his ship, Serenity. He leads a small, eclectic crew who are the closest thing he has left to family - squabbling, insubordinate and undyingly loyal.

When Mal takes on two new passengers-a young doctor and his unstable, telepathic sister-he gets much more than he bargained for. The pair are fugitives from the coalition dominating the universe, who will stop at nothing to reclaim the girl. The crew that was once used to skimming the outskirts of the galaxy unnoticed find themselves caught between the unstoppable military force of the Universal Alliance and the horrific, cannibalistic fury of the Reavers, savages who roam the very edge of space. Hunted by vastly different enemies, they begin to discover that the greatest danger to them may be on board Serenity herself.

I had never seen the television series "Firefly" before this film, and yet it still made my top 6 films. It goes without saying therefore, that this is a brilliant stand-alone movie. This film is based around a mish-mash crew of mercenaries, who take on a brother and sister that are attempting to flee one of the most powerful agencies in the known world.

With many conflicts of interest, most regarding the safety of the crew with wanted fugitives, is a constant source of interest, with many members of the crew willing to drop the 'damaged yet telepathic' sister at any moment. But you find a gradual bonding as eventually they all become part of a family, and fight together to protect each other, and do what is good for the universe long term.

Serenity presents a lot of great scenery, and engaging plot. With the constant threat of the system government, known as the Alliance, the operative sent to retrieve the sister, and an inconsistent army of unrelenting cannibalistic Reavers.

With similarities to the original Star Wars trilogy, the lack of slim, sleek, and shiny things is forgiven, and in fact preferred. The characters are well cast, and there were no characters that I disliked. This movie serves to bring any outsider up to date with the back story of the Firefly universe, and is a movie I watch frequently.

I came to a screening of this film, as a "die-hard brown coat". I hadn't just watched the tv series, I had revelled in it. It's rich mix of deeply flawed characters thrown together in space. Kind of like Blake's Seven for a modern audience. This was the original cowboys in space.

It had everything. Sex, violence, a fantastic story. Plenty of plot hooks and twists to follow up on. The cast was amazing as well. But after 13 episodes, the network pulled the plug leaving us to wonder what happened.

Whedon took up the hope, bringing us Serenity, the first of a trilogy of movies that was set to help restore the tv series. Serenity was the only one that ended up being made. So what went wrong?

This movie follows the same road as the tv series. All the same cast, all the same sexual chemistry, fights and fun. It is essentially an extended episode. As a fan, I just feel he missed the mark and the point. His fans had so many questions about the characters and what would become of them. For some, the answers were black indeed. For others we may never know.

The end of the film was just such a disappointment for me. The end of possibilities really upset me the most. Its a shame, because the concept of the show and the movie were so amazing. But as a cult hit, it was never going to make the big money. And you don't get sequels or tv series re-launches without the cash, cash, cash.

Based on the tragically short television series Firefly, Serenity is an engaging standalone movie that draws the viewer into a gritty and believable future where criminals and fugitives are the heroes in a world ruled by the Universal Alliance.

I watched this movie having no idea what to expect. I chose it because it had a girl holding deadly looking weapons on the cover. What I loved was the heart and believability of all of the characters, and it was certainly an ensemble cast. From the incredibly cute and lovable engineer Kaylee, to the gruff but adorable captain, the bumbling naive doctor, and even the blade wielding, crazy teenage girl, the crew of the Serenity made me fall in love with them - and led me on to watching the series. Only later did I discover that Serenity and its predecessor Firefly were both written by Joss Whedon, the genius behind Buffy the Vampire Slayer and Angel.

Like Buffy, Serenity shows a respect towards its female characters that I admire. They are powerful, but real, beautiful, but not sex objects. My only warning when watching Serenity (or Firefly) is the danger of becoming an addict. The world Joss Whedon has created is so wonderfully funny and interesting that it comes as a huge disappointment that there isn't any more. Still, watching this film is an experience not to be missed.

I started watching the series 'Firefly' from early on and found myself quickly immersed in the storyline, so I was very happy to find out it had been made into a movie. The things that drew me to the show were the humour and good action scenes. I found they both travelled well to the big screen, but in 'tense situations' it did tend toward the overly dramatic.

The story took many twists and turns to try to get answers to some questions raised in the t.v series. There were times I felt that the special effects didn't keep pace with the move to the big screen. Although the concepts behind some of the contraptions were intriguing, I thought that the way they had been depicted in the movie could have looked more hight tech.

I had a great time watching this film and look forward to when it comes out on dvd. It already has come out as the 'Firefly' series and I intend to get it when it reaches a price I can afford.

Not having been a die-hard fan of the TV series this was based on, Firefly, I still managed to find this movie highly enjoyable. A bit OTT with the plot, but the technology they used was stunning, and not too far out of the bounds of possibility...

With a great cast, some brilliant action scenes, plenty of moments of hilarity and humour, and some unexpected twists right when you think you know what's coming next... it really keeps you hooked on the screen.

Some of my personal favourite bits included the first scene on the ship itself, where the Captain (Mal) makes an announcement to the crew about the re-entry... the scene where delightful Jewel Staite makes an interesting comment as the crew entered a bar - I didn't know if I should laugh, blush, or start writing her a letter to offer my assistance... and pretty much all of the fight scenes involving The Operative... such a stunning display of precision combat.

However, there were a few scenes that weren't exactly gore-filled, but they implied enough to make me feel a little queasy... at one point, the sound-effects had me on the verge of dashing for the loo! So if you have a 'tender disposition', you might want to seek other entertainment options.

Overall, it's a great movie to pass the time, but strangely enough, I walked out feeling a little disappointed... perhaps because the movie ended with almost the same joke it started with, and the entire movie's plot had done a complete turn away from where it started, and I wasn't too sure what the point had been. But hey, it was still fun, and any sci-fi buff would find it engrossing.