A Cure For Wellness review 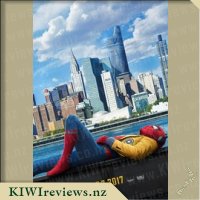 Several months after the events of Captain America: Civil War, Peter Parker, with the help of his mentor Tony Stark, tries to balance his life as an ordinary high school student in Queens, New York City while fighting crime as his superhero alter ego Spider-Man as a new threat, the Vulture, emerges.

Wowzers... while I can't say I am a huge fan of Tom Holland as Spider-Man, I will honestly say he's far from the worst casting I have seen. He really is the "14 year old kid" that the original Spidey was set as, rather than the moody 20-something the last couple of actors have portrayed him as.

In this offering, we get a good dose of Iron Man, naturally, and get introduced to a definitely-21st-century version of Vulture (not the mutant of the original comics) but something literally built from the scraps of warriors like Falcon and Iron Avenger drones with a generous dose of Jitari alien tech thrown in. That was a nice twist that I didn't expect... but should have I suppose.

My biggest thing with this movie was that it ACTUALLY WORKED... After a few really-awkward-teenage-angst moments that had my cringing in sympathy, I was really getting into the new Spidey as a novice, but fairly effective hero... a bit like Wreck-it Ralph. It's one thing to stumble over your own feet on a dancefloor, but when you're a few hundred feet in the air, fighting a lunatic in a mechanical bird exosuit... well, that's pretty awkward. That seques nicely into my one small rant... the bird suit. It is clearly shown to be a powered exo-suit requiring a human pilot to control it. There's no cybernetic helmets in sight, no WiFi implant webs, and certainly no onboard AI of any note... so there's one scene that makes absolutely NO sense to me at all... if you see the movie, you'll understand when I say "it brings the house down... how exactly?"

There's a couple of fun scenes in the flick, and a few where Peter has to make a few snap-calls that pan out better than they may otherwise have, but really should not have happened at all if someone higher up had actually listened to him and TOLD HIM they were listening... but that's parenting and mentoring for you - you try your best, but you're always going to miss the mark on something because... well... kids.

I also had mixed feeling about this one because I am really hanging out for some continuation of the big "Infinity War" plot... and this movie has nothing to do with that apparently. There's certainly nothing in the movie to suggest there is a connection other than Iron Man appears in both... but it did go a long way to justifying, and explaining, some of the hot-dogging stunts Peter pulled during the airport fight scene in Civil War. There was some great character background and depth, plus of course it allowed the MCU to move the timeline onwards almost a year without there being a huge "what happened in all that time?" questions popping up.

Overall, I really quite enjoyed this movie - more so than some of the other MCU titles that carry more of "The Big Picture" baggage with them. I enjoyed it a lot more than I thought I was going to, if I were to be honest about it. And, as usual, silly cameo of Stan Lee, and some fun easter eggs in the credits. DO stay right to the VERY end... yes, there is an easter egg at the very, very end... and you'll laugh. (Well, I did... it was funny!)