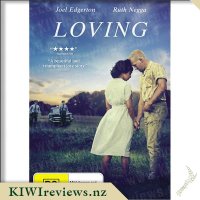 Disclosure StatementFULL DISCLOSURE: A number of units of this product have, at some time, been supplied to KIWIreviews by Universal Pictures NZ or their agents for the purposes of unbiased, independent reviews. No fee was accepted by KIWIreviews or the reviewers themselves - these are genuine, unpaid consumer reviews.
Available:
June 2017

In 1958, in the state of Virginia, the idea of interracial marriage was not only considered to be immoral to many - it was also illegal.

When Richard (Joel Edgerton) and Midred (Ruth Negga) fall in love, they are aware of the eyes staring at them and the words said behind their back. It is when they get married, however, that words and looks become actions and the two are arrested. The couple decide to take their case all the way to the Supreme Court in order to fight for their love in this passionate and gripping drama.

This movie is based on a true story. A movie such as this one really does encourage you to think about life, laws and how peoples lives are affected differently by society. I love a movie that is based on real life, so was really interested to watch Loving.

Loving is based on the true story of Mildred and Richard Loving. Mildred was a 'coloured' woman, and Richard a white man. At the time interracial relationships and marriage were not accepted in Virginia, where they were living. The movie follows their journey together, from getting pregnant, getting married and the issues that soon followed. Reading on Wikipedia it seems clear that this movie paints their story reasonably accurately, at least in regards to all of the major details throughout the movie.

Joel Edgerton and Ruth Negga play the characters of Richard and Mildred Loving. From the picture of the couple that appears at the end of the movie they have done very well in casting actors who look very much like Richard and Mildred. Edgerton and Negga portray the characters very well. You can see and feel all of the emotions through their portrayal and it is very believable. If only Richard and Mildred were still alive to know their take on the movie, especially because Mildred has been stated on Wikipedia as saying an earlier movie about their life wasn't very true.

I felt that the movie started very quickly. Reading the synopsis and putting the DVD in I thought I would get to see a little bit of the back story of Richard and Mildred, possibly from when they first met and started dating, but this wasn't true. In the whole scheme of things these details aren't really important and the movie did start at the first defining point in their lives - when Mildred had just become pregnant. Although classed as a drama, I didn't find this movie to be too dramatic (if that makes sense!). It simply is a retelling of the lives of Richard and Mildred, it states the facts but doesn't over dramatise anything. For this it is very real and you find yourself caught up in the emotions that they were most likely feeling at the time.

By the end of the movie I was feeling relief for the couple, but some what angry. Even though the couple won and helped to create a far better future for all interracial couples, they wasted good years of their lives together fighting this. We are very lucky that this battle is one that has already been won and people now days don't have to live it. However, I then got thinking and realised that yes, some people still do live a life just like the Loving family. Same sex marriage is still not legal in all parts of the world, and many people are fighting this every day. In my mind, as long as a couple is happy and they aren't hurting others, why shouldn't they have the right to be together that any other man and women do.

Overall this is a movie I would enjoy watching again and will definitely recommend it to others. If you enjoy movies based on true stories then this is a must watch for you.

Jack Wyatt (Will Ferrell) is a difficult Hollywood star who is trying to make a comeback by playing Darrin Stephens in a remake of the series. When Jack sees the beautiful Isabel Bigelow (Nicole Kidman), he thinks that she'd be right for the part of ... more...