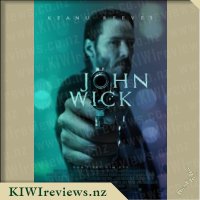 An ex-hitman comes out of retirement to track down the gangsters that took everything from him.

I am not an action film kind of girl, I much prefer a romantic comedy or family movie so when my partner hired out John Wick I was expecting yet another action film that I would fall asleep ten minutes into but I was mistaken! John Wick kept me engaged and interested. I felt Keanu Reeves played the part well. His stealth level was over and beyond. Morals were not really exercised in the film but what it lacked in morals and empathy it made up for in action and blood. For a movie that involves a lot of people being shot dead it was pretty good!

The point of the film was to track down the gangsters that robbed John Wick of all that he had I would have to agree that this was achieved and a great movie was made, it is one I would watch again and recommend to others although Keanu Reeves in "Sweet November" is more my style I will admit to you here I did like this movie, the role was well played and the "bad boy" thing had a little bit of sex appeal for the ladies that like that!

Ten out of ten!

My husband wanted to watch this as he had been told it is one of the only movies Keanu Reeves actually acts in it. I can't say I totally agree, he was just Keanu Reeves. Can't say if I would call it acting neither can I say the movie would of been any different if someone else had taken the lead. This movie was awesome. A great shoot him up, kill everyone, fantastic stunts, visually appealing, great script, really it had everything going for it. Just a movie you can sit back and enjoy as everything unfolds right before your eyes. Also I found I did not get bored during the fight scenes as it keeps your attention with the body movements and other action unfolding.

It has to be said you do not kill a mans dog. It is just wrong. Nor do you break into someones house and steal their car especially when they are grieving. I was not expecting much from this movie but I have to admit I am pleasantly surprised. It is so refreshing to watch some real action and fantastic gun work. John Wick is the man you send to kill the boogeyman. Although a little rusty as been out of work for a while he picked it up again really quickly.

Okay I know its fiction but I liked how the hitman are portrayed. How they have a hotel they all stay at and the have special people to clean up there mess. I also like how hitman have rules and you are not allowed to break them but most of all I like how polite and respectful they are to each other. It just made it seem like they are have any other 9 - 5 job. This movie definitely had a lot going for it and I could gladly watch it again. I understand a part two is coming out and I will definitely be lining up to watch it especially now that he has a new dog.

An ancient pyramid is discovered buried in the ice of Antarctica, and scientists investigating the structure discover something terrifying: two races of aliens battling for domination.

As the two species fight, humans find themselves caught in the middle and becoming casualties.