« If I Had An Elephant review

Marvel Guardians of the Galaxy Vol. 2: The Novel review 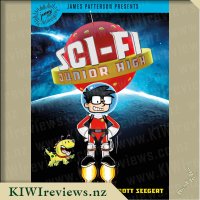 At least, that's what everybody at Sci-Fi Junior High thinks. So maybe Kelvin lied a little about being a genius to fit in. And maybe a mad scientist is about to take over the universe unless Kelvin can stop him. Maybe everyone is doomed. Well, at least Kelvin won't have to worry about homework any more.

My 9 year old daughter loves reading and will happily take herself off to her bedroom and read. She does tend to keep to the same 'genre' and book series so when I saw this book, although it's not something she herself would choose, I thought she would enjoy it. Sci-Fi Junior High is about a new kid called Kelvin whose school happens to be in space. He is the son of Earth's two most famous geniuses and everyone thinks he is a genius too (thanks to some little lies Kelvin has told) An evil mad scientist tries to take over the universe and Kelvin has to try and stop him.

This is one funny book if the sound of laughing from my daughter was anything to go by. At 300 pages it is a great book for young Chapter book readers and has relatively short chapters. The chapters contain lots of cartoon type illustrations and and some are very much like a comic strip. My daughter liked how they broke up the speech of characters by placing an illustration of the characters 'head' by the text so it was very easy to follow the conversation flow. There is also a lot of different fonts and the use of bold letters which break up the text and make it a lot more interesting for the younger reader.

Ultimately, this book is about friendship and accepting our differences which is great. My daughter really enjoyed this book and can't wait for the next one in the series to be released. I would definitely recommend for younger readers starting to read chapter books, they will thoroughly enjoy it!

Miss Eight was taken with the title of this book as she is fast developing an interest in fantasy fiction, but we were both amazed to find that the name was not short for Science Fiction - it was short for Sciriustrati Fibronoculareus! Neither of us had a clue what the full name meant, and even our pronunciation was guesswork, so we decided that Sci-Fi was a very sensible abbreviation.

The format of the book lies somewhere between conventional chapter book novel and graphic novel - there are plenty of illustrations, sometimes standalones and sometimes an integral part of the story. As an adult I am used to reading the text and looking at the pictures after I have finished the section I am on, so I found it mildly challenging to continually jump from text to cartoon strip and back again. Miss Eight, however, found it quite logical. She tells me she is more likely to enjoy a book if it is liberally illustrated.

Changing schools is always difficult - Miss Eight's parents moved house recently and she had to start at a new school, so she knows just what that is like. Every school is different but Sci-Fi Junior High is more different than most. Miss Eight was intrigued that the students go to a canteen and sit down for their meal. In both the schools she has attended the canteen has been a small room where food is available for purchase but is then taken outside for consumption. She found the idea of a dining hall where food fights are the norm quite unbelievable!

Kelvin's attempts to fit in are related through his own eyes: the style is conversational, and Miss Eight was able to empathise with him. Like Kelvin, she met an assortment of people when she changed schools, one or two of whom were bullies and others who were destined to become her good friends. Kelvin's new friends are a little more diverse than Miss Eight's. Her favourite was Grimnee who made her laugh every time she did a little problem-solving in her own unique way. And as for Kelvin's sister Bula - Miss Eight knows all about annoying siblings as she has a four-year-old brother.

The exotic setting means that Kelvin's adventures with his new friends are a little more far-fetched than most, but given the context of the story this is something that the reader accepts right from the start. Miss Eight had no issues in suspending disbelief in order to just relax and enjoy the book. Intergalactic travel via wormholes, a pet that can clone anything, a boy who lives in a portable fish bowl - all these, and many other "impossibilities" became plausible in the context of the story.

Miss Eight concluded that she enjoyed the book and would now like to get out her colouring pencils and enhance some of the graphics so they would look more interesting. But her final comment really made me smile: "Anyway, I may have an annoying little brother, but at least Daddy does not go round all the time saying "HAR!"

Score: 7.3
Product reviews for listing 8252: To Trap A Thief
Written by: Des Hunt

A man who hands out $100 notes like they were peanuts.
A small-town loser robbed of a big lottery win.
A young woman held against her will.

Connor expects little from a campervan holiday with the elderly couple who are soon to be his step-grandparents. However, life gets exciting when messages arrive, sending him and his mate Harvey on mysterious missions in search of a ... more...