What's the Difference: 40+ Pairs of the Seemingly Similar review 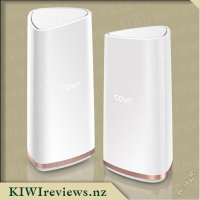 Featuring warm and contemporary designs to suit the decor of any home, both Covr models provide Smart Roaming for seamless Wi-Fi connections, as well as Smart Steering to guide devices automatically to the optimum wireless band.

One of the biggest issues these days is the new trend of building with metal framing instead of traditional wood. While this provides better, longer-lasting structures, it creates a mass of Faraday cages out of every room in your home, killing WiFi and creating dead spots in even small dwellings. The solutions are fairly obvious - either run a web of cables and jackpoints through the home during construction or have WiFi available in a very small space, leaving the rest of your home a digital desert, devoid of access. This is where devices such as these, which form a scalable network comprised of multiple nodes, known as a mesh network, really shine.

The premise being that each node has a clear connection to at least one other node using one of the 5GHz channels as a backhaul conduit, and casts a net of WiFi availability around it. As you move around the building, the nodes exchange your connection between them, keeping you linked to the modem and thus the internet as a whole. It's the same principle as the cellular mobile network. So, while this is nothing new, and WiFi extenders have been around for ages, a system this simple to set up and expand has not been feasible until recently, and D-Link has proven themselves more than capable of bringing it to the end user at a price that belies the scale of economy. Seriously, I can't figure out how they can put out a product this advanced and clever at this low a price!

Setup proved to be a breeze. By following the easy step-by-step direction, I had the network running in no time. Even allowing for the fact that I did learn a few things testing the COVR-C1203 kit previously, I felt the COVR-2202 was even easier to set up. Perhaps D-Link redesigned the setup protocol based on feedback from users of the C1203, or maybe it just worked better this time for some reason I can't explain, but either way I was impressed at how quickly I was online and my WiFi was zooming along even in areas that were experiencing very poor coverage under the single-access-point WiFi I had running previously. I should note, the building this was tested in has timber framing, so doesn't suffer from the Faraday Cage effect, but still had zones that had little to no WiFi signal at times, especially during inclement weather.

Once it was up and running, a noticeable improvement in WiFi strength and data through-put speed was easy to detect, but the most important thing was how moving between coverage zones didn't cause any drop-out in the signal while devices swapped to another network - a common issue when using WiFi extenders that create a secondary SSID connected to your main network device. This is because all the access nodes create a single, distributed network under the one SSID. One network, one password, no human interaction required after the initial connection is made. The base nodes will seamlessly shuffle things between them so you never see a loss in connection. Having the MU-MIMO (Multi-User, Multi-In Multi-Out) technology means that devices will always receive the maximum bandwidth possible, and the system can switch them to a different band if needed to balance the load better. It may mean that if you have too many devices trying to make use of the 5GHz band some get bumped to the 2.4GHz band... and while this may seem like a downgrade, it would only happen if the bandwidth available there was still more than the maximum that could be assigned in the 5GHz band. Having the slow-lane to yourself can sometimes be faster than suffering from gridlock in the fast lane. Ask any Auckland Motorway driver, they'll tell you.

This kit is rated to cover 560 square metres, so if you need more coverage you simply add more nodes to the mesh, expanding the coverage as much as needed. Having a solution like this means that you can scale the system to suit your needs, rather than scale your needs to fit the system. Each node also comes with 2-gigabit ethernet ports to allow non-WiFi tech, or older devices that use narrower WiFi bands but have an ethernet port, to benefit from the network formation. Things like NAS boxes and older gaming consoles are prime examples of this, and it means far fewer cables to thread through walls or hide under rugs. The one thing that I was disappointed to see missing though was USB ports. The COVR-C1203 kit had USB-C ports on all nodes, allowing for portable hard drives to be attached and become network storage, but these towers were missing that feature which I thought was a strange, and potentially damaging decision by the designers.

From a novice user's point of view, this unit has a number of smart design features in the software. Prompting for creation of SSID (network name) and passwords at appropriate points means that you never have to worry about being hacked due to default passwords you didn't know how to change, and there's also the option to set up a "Guest account" to allow visitors limited access to the internet, and your home network if you so choose. This gives you the reassurance that, when they have departed, you can close off that option and reduce your risk exposure by half without affecting your own, secure connections or having to change passwords again. You can set a schedule for the guest network too, meaning if you have regular guests, say a gaming group or social club, you can automate the access so that it becomes a set-&-forget thing that happens in the background, making one less thing to worry about on your event preparation to-do list.

While the majority of advanced features are best handled through the web interface, the D-Link WiFi app is quite feature-rich and allows you to handle all the basics and many of the advanced features. I was impressed by the capabilities of the firewall, which added another layer of security to your home network without the need to call in a tech or learn to read ubergeek. I won't dive into that, as it is, in most cases, something the average user can ignore and leave it to handle itself, and advanced users will find no big surprises in there anyway. It does what it does, and it does it well enough to be a benefit rather than an annoyance.

Overall, I was highly impressed, more-so than by the COVR-C1203 kit actually. While that kit had the USB-C ports, this rig has a much better bandwidth management and the 6 aerials in each tower allow for improved signal steering, ensuring moving devices get the same level of connectivity as static devices like gaming consoles. I'd love to see a third set of devices, ideally to replace both of the current offerings, that give tri-band AND USB-C functionality, but in the meantime, this will suffice for those who don't need or want to have distributed network storage as part of their infrastructure. This kit would be ideal for small businesses and home-office scenarios that need to improve their WiFi landscape without replacing their hardline local network entirely. In terms of value, it's exceptionally well-placed as an affordable option for even a home user who simply wants to be able to watch buffer-free Netflix in bed or the lounge with equal quality. I had no trouble streaming 4K video files across the connection without any lag or buffer, and gaming ping times were the lowest I have ever seen on a wireless connection. Great stuff!

In harmony with Android and iOS*
The Huawei Watch is designed to be part of your look, and part of your life. It pairs with any Android phone and it's also one of the first watches powered by Android Wear to work with iPhone.