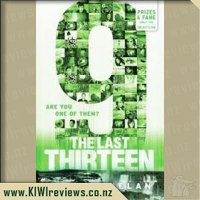 In the aftermath of their devastating tragedy, the Academy turns towards an unlikely ally. But Sam's trust in everyone around him continues to be tested to the limits.

Sam journeys to South America, his dream leading him to a long-lost ancient city. Hidden deep within the Amazon rainforest, he is forced to navigate deadly traps in pursuit of another Gear.

Can Sam work out who the next dreamer is in time, or will his enemies succeed once more?

He must find the last 13. They must fight on.

I have to say, this series is only 5 books in, and yet the story has developed into something beyond what I originally thought it would become. Considering the last book's ending, I was very curious to see just how the characters would get out alive, so it was great to see just how the cliffhanger from the last book was resolved in the beginning of this one. It was great that this section of the story took place in Brazil, as I once had to do a project on the Amazon River, so I was able to better picture the environment.

The book's storyline made a nice, fluid transition from one event to another, and there were more than one perspectives in place at any one time, with each split up into segments with cliffhangers at the ends of each of them, like the book is hanging carrots on sticks, luring me through on-wards to the end. I think that this structure is indeed quite effective, and I have to say that is is a really good way to keep the reader on the edge the whole way through, as well. A pattern I am noticing with this series is that the story becomes more complex as it goes along, while allowing each book to piece together seamlessly.

I think the book was intense, and it also had quite a bit of technical aspects as well, such as using large metal towers, such as the Eiffel Tower, as large antennas to pick up brainwaves, and even using complex programming combined with video games to destroy nightmares, while this is an impossible concept (for now!), it still added a sci-fi twist to the story, making it FAR more enjoyable than ever. I found it a bit hard to try and keep up with the storyline, a few characters forgotten and a few events which became a bit vague, but overall, I think the story is highly enjoyable.

I would recommend this book for a 12+ reading age, as while the book is far more simple by comparison to other books I have read, the storyline can get a bit tricky to get one's head around, so younger readers may have trouble keeping up. The book price is reasonable, it stays close to the average price for books of this sort, so there are no rip-offs to be seen here, folks. To give out the general gist of this book, I would only have to say one thing: READ THIS BOOK, YOU WON'T REGRET IT!!!

I am still yet to find faults in this series it is such a great book for pre teen children, a really great series with none of that swearing or inappropriate stuff you seem to find in books these days. I happily let my 12 year old read these books knowing that they are nothing but a good read. If anything they are actually good for teaching bits and pieces of geography and history, being that Sam and the last thirteen trot around the globe so much uncovering archaeological sites and artefacts, really quite fascinating stuff really!

As you can read from my review of the Last Thirteen: 10 I left the last book feeling quite shocked and not knowing where things were going to go next with the attack on the academy leaving characters in a bit of a hard place. So I was really keen to start reading this edition as soon as possible to carry on the story. Although the academy are trying to fit the pieces back together and get on track they are still facing difficulties and this makes for interesting reading as well.

There is quite a lot of advanced technology in the storyline which the academy and the dream council use for dream examining and control and it is intense I couldn't even imagine that level of technology, I turn on the computer and it goes, none of this coding and encrypting stuff but I do find it a fascinating subject to read about. The academy and the enterprise are doing everything they can in this book to gain control back of their computer systems and beat Matrix who has managed to get control of the computer systems.

We go on yet another adventure as Sam searches for the next of the last thirteen. This time taking us to Brazil and a lost city in which Sam must find the next gear. Again it is full of adventure and action as Sam and the next dreamer run into attacks at every hurdle and we wonder how they will get out of it this time. At the end of this edition we are yet again left wondering whether Sam is going to get through and how he is going to get himself out of trouble with a cliff hanger ending.

An interesting twist in this book is that The Enterprise and The Academy have decided to begin working together to strengthen their chances of winning the race to the dream gate and the bakhu but so many other people are wanting to get there first. We learn of interesting connections with Solaris as traps are set to ensnare some of the dreamers in an attempt to get to Sam and the professor and change the races direction. Definitely looking forward to the next book!

Georgina - a teenager, alone and pregnant - is estranged from her mother and father. When she seeks refuge in a country town, she discovers her grandmother has passed away, leaving her more alone than ever.

It is here, in a small country hospital, that she must come to terms with the enormity of what she faces and the new life she is now responsible for.