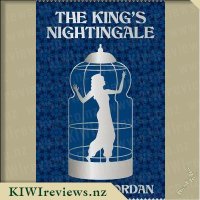 Disclosure StatementFULL DISCLOSURE: A number of units of this product have, at some time, been supplied to KIWIreviews by the company for the purposes of unbiased, independent reviews. No fee was accepted by KIWIreviews or the reviewers themselves - these are genuine, unpaid consumer reviews.
Available:
February 2021

An epic fantasy set in a land of sultans and kings, sumptuous palaces... and slave markets.

When Elowen and her brother are seized by pirates and sold, separately, in the slave market of a distant land, Elowen's enduring resolve is to escape, rescue her brother, and return home.

Sold to a desert ruler who admires her sublime voice, Elowen is given the title of the King's Nightingale. Honoured by the king, and loved by his scribe, Elowen lives a life of luxury, until she makes a fateful mistake and finds herself sold to a less charitable master.

Nightingales are renowned for their beautiful song, but it is always the males that sing! This made me wonder why Elowen, the heroine of this story, was named King's Nightingale by Shaistakhan, the strangely empathetic ruler of Al-Zafar. However, it quickly became evident that Elowen was no ordinary girl. Despite her youth, she was a fierce feminist and more than a match for many of the men and boys who would have lorded it over her. Gradually she earned their respect for her outspoken manner and physical prowess, and her advice was accepted on several occasions when the fate of her adopted country was at stake.

Elowen is certainly a person of many talents, not the least of which is her ability to survive when others would succumb. During the course of the book she is kidnapped, sold into slavery, taken on a forced march, challenged to swim against the current of an underground stream, beaten, physically abused, banished, and made to look on as her father and best friend Heath succumb to the horrors of the slave boat. Yet despite this she sings beautifully - giving herself and those around her strength - and she challenges the expectations of society by insisting that she be taken seriously even though she has neither the status nor the background to support her. She cares for her little brother Fisher and her adopted "daughter" Laila, and is an inspiration to the other women around her.

Although this is a work of the imagination, there is no doubt that the author has taken historical events and real places and woven them into the story. The characters' names, the description of various ecological systems, and the social organisation of different ethnic groups all conjure up a South Mediterranean world that reaches westwards to the British Isles and eastwards to Asia. Some of the descriptions are quite grim. The conditions that slaves had to suffer below deck are presented in unapologetic detail: yet these were the same conditions which real people being transported to slave markets had to endure. No wonder so many were infected and died en route. Punishments for sometimes very minor transgressions could mean a hand being amputated or an eye put out. Some younger readers might find these descriptions quite upsetting, but most will find the realism makes them all the more believable.

Having read the book myself, I offered it to Mr 10 and Miss 13, both accelerate readers and into fantasy fiction. Mr 10 read a few pages, then handed it back to me - he found it too demanding. Miss 13, on the other hand, read the same few pages and then waved me away. She wanted to finish it! When she returned the book to me a week later, she assured me she had enjoyed it to the extent that she wished she had known Elowen. It is quite a lengthy book, but she managed to read it over five days and was buzzing about all the adventures that Elowen had experienced. Clearly there is a place in literature for a strong female protagonist who can inspire teenage girls to take risks and aim for leadership roles.

I appreciate the way the book was paced. There are some flashbacks, but only where necessary to provide a backstory; most of the adventure segments are fast moving and make compulsive reading. The burgeoning love between Elowen and Mahasena forms a backdrop to the action; it never takes over but is there nonetheless and the hope is that eventually they will settle down and build a life together. The author treads a fine line between romance and comradeship, an approach that appeals to young readers who can cope with a little violence but are not mature enough to appreciate "too much Mills and Boon!" as Miss 13 put it. The romantic sub plot is implied but is always secondary to the main thread. Miss 13 did suggest that there could be a sequel featuring Laila as the main protagonist. Not such a silly idea!

Join in with all your favourite characters in this amazing mask book.
With four touch-and-feel masks, just press out and play for hours of fun!