« Think of a Number review

Hancock's Half Hour - Volume One review 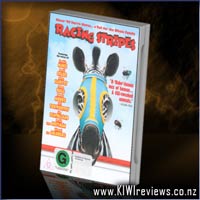 During a fierce thunderstorm in rural Kentucky, a young zebra is accidentally left behind by a travelling circus. He is found by a former champion horse trainer, Noal Walsh and 'Stripes' is quickly adopted as a favourite pet by his daughter, Channing. Now 'Stripes' may not look like the other horses galloping across the fields, but he thinks he is no different and longs to race with all the thoroughbreds. So does Channing and, with some encouragement from his fellow barnyard animals, the pair embark on the unthinkable dream of racing in the ultimate: The Kentucky Open.

Featuring the voices of leading Hollywood stars (Dustin Hoffman, Whoopi Goldberg, Mandy Moore, Snoop Dogg and more) this Babe-like box-office hit is an irresistibly funny and entertaining tale about overcoming adversity, aiming for the impossible and triumphing against all odd.

"Racing Stripes" is a cross between "National Velvet" and "Babe," leading to the inescapable question: Why not see them, instead of this? It tells the story of the young girl who has faith in a disregarded animal and rides it to victory in a derby, and it has the barnyard full of cute talking animals. There are kids who will like it, but then there are kids who are so happy to be at the movies that they like everything. Adults are going to find it a little heavy on barnyard humour and a somewhat bore.

I get that parents who took their children to see "Racing Stripes" say that the whole family loved the movie. For them, I am happy. It is a desperate thing to be at a movie with children who are having a bad time. But when you think of the "Babe" pictures, and indeed even an animated cartoon like "Home on the Range," you realize "Racing Stripes" is on autopilot with all of the usual elements: a heroine missing one parent, an animal missing both, an underdog (or under zebra), cute animals, the big race. This is the kind of movie you might grab at the video store, but it's not worth the trip to the theatre.

I give this movie a score of 2/10, my son enjoyed some parts of it, I couldn't even stand to watch 30 minutes.

What a film. My daughter has been entertained through numerous re-runs of it, and wants to watch it almost every night, and I can easily see why. This is a humorous tale that will appeal to children and has enough humour to entertain adult viewers too.
The tale is a heart-warming one, the triumph over adversity sort of thing, but with a real twist, the hero of the film is a zebra.
The animal acting is superb and it is a real credit to the animal trainers and the animals themselves; the talking sequences have been seamlessly animated into the film and is just one indication of the technical expertise that has gone into the making of this film.
The special features menus contain enough to interest the viewer on how the film was made, how the animals were trained, how the animations were done to convince the viewer that the animals really were talking.
The film is easy to watch, the story flows very well from one scene to the next and is superbly scripted. The choice of actors to lend their voices to the characters is excellent, and does so with believable ease, some are well known, others not so well known and ties in with the character of the animals and the animations.
One of the characters I enjoyed most of all there the sub-stories featuring the flies, almost deserving of a show or series to themselves.
This film deserves ten out of ten on all counts

Score: 7.8
Product reviews for listing 6174: Harry and the Hendersons -  Director:

An easy-going father's life is suddenly turned upside down when his car hits a real-life bigfoot. Thinking it's dead, they bring it home only to find that it is quite alive. Trying to hide their furry friend as they race to get him back to his natural environment isn't so easy.