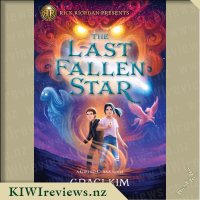 Riley Oh can't wait to see her sister get initiated into the Gom clan, a powerful lineage of Korean healing witches their family has belonged to for generations. Her sister, Hattie, will earn her Gi bracelet and finally be able to cast spells without adult supervision. Although Riley is desperate to follow in her sister's footsteps when she herself turns thirteen, she's a saram--a person without magic. Riley was adopted, and despite having memorized every healing spell she's ever heard, she often feels like the odd one out in her family and the gifted community.

Then Hattie gets an idea: what if the two of them could cast a spell that would allow Riley to share Hattie's magic? Their sleuthing reveals a promising incantation in the family's old spell book, and the sisters decide to perform it at Hattie's initiation ceremony. If it works, no one will ever treat Riley as an outsider again. It's a perfect plan!

Until it isn't. When the sisters attempt to violate the laws of the Godrealm, Hattie's life ends up hanging in the balance, and to save her Riley has to fulfill an impossible task: find the last fallen star. But what even is the star, and how can she find it?

As Riley embarks on her search, she finds herself meeting fantastic creatures and collaborating with her worst enemies. And when she uncovers secrets that challenge everything she has been taught to believe, Riley must decide what it means to be a witch, what it means to be family, and what it really means to belong.

When Rick Riordan puts a book under his label "Rick Riordan Presents" you know you're going to get a good mash-up of modern day and mythology, and that is exactly what you get with The Last Fallen Star. Here we get a fabulous introduction to Korean mythologies but in a current day setting with a well rounded main character in Riley.

Riley is a fun character that you really feel for, she has been adopted into a family of people who can perform magic, in a world where there are six clans, each of which has their own power base and it is the only life she has known, but she can't perform magic herself as she is a saram (non magic person). You can feel the ache that Riley has, as being an outsider leads to difficulty with her family and bullying from those within the community. Of course, you know that magic + Riley is going to come into play somehow, wouldn't be much of a book if that didn't happen and soon enough Riley's world is turned upside down and she's off on a quest to save her sisters life.

Throughout the book we have references to the Goddesses who were the reason some people gained magic, but we are also introduced to various creatures from Korean mythology from the Dokkaebi (goblin like creatures that make you live out your worst fears and then eat them) to Inmyeonjo (body of a bird, face of a woman, HATES mirrors) with just little bits of information on their backgrounds with flow into the story with ease. I love how Riley's world just slips into place in our own, from illusions used to hide their world from us to how some of the clans utilize modern technology (one room you must perform a karaoke song to enter). Riley's fear at not belonging is so strong and such a powerful motivator throughout the entire book, he desperation to finally fit has you hoping she finds a way, even when everything seems to be going wrong.

I really enjoyed the twists and turns that came with this story, and though to a reader like myself, they weren't completely unexpected, they were timed well and fit the overall story perfectly. Sources tell me that this is the first in trilogy and I for one, can't wait to see where Riley heads to next and if she manages to figure out her place in the world.