ProdID: 6874 - Dinosaur Train: All Aboard the Zeppelini
Type of Show: Childrens 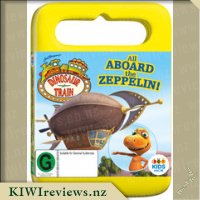 Dinosaur Train: All Aboard the Zeppelini product reviews

Buddy, Tiny and the whole Pteranodon family are having all new adventures as they explore the Mesozoic era on the Dinosaur Train Zeppelin! Fly high aboard the latest amazing vehicle from Dinosaur Train Industries and get a bird's-eye (or Queztalcoatlus-eye!) view of a pod of marine reptiles as they migrate through the ocean, watch the land mass Pangaea as it starts to break into continents and even learn about asteroids and the craters they make when they crash into Earth. With the Dinosaur Train: Zeppelini Adventure, there will be fun and flights that cannot be missed!

This DVD contains the final episodes from Series 3.

My kids, particularly my eldest, love the Dinosaur Train, so I knew that they would enjoy this, without a doubt. Each show starts off with the, by now, well known theme song, which my eldest could sing along with the episodes, with the first episode then leading us to the Zeppelin and how they were going to use it to explore more places, which they do. Each story visits a different main plot line, though I am used to each episode being about a particular dinosaur, this DVD had episodes about meteors and Pangaea, which really grabbed the kids attention.

I do have a gripe though, for example, the meteor episode they went to see where one had crashed and the remaining crater but it felt really short when counted against everything else in the episode, with a few minutes taken just to get in the Zeppelin and then a second song, which we've already heard in other episodes... This happened for most of the episodes so I felt this really could have been done better. One thing I did like was that at the end of each there is a little segment from "Doctor Scott" who gives a little real life info about what we've learned in the episode. The best thing that he says... He encourages the kids to get out into nature and discover things for themselves.

I do like the idea of the Zeppelin because it means they can discover more things but it felt like less time could have been spent on getting them to it and back. However the kids loved it and are asking to watch it again.

All your favourite The Wiggles songs and dances in one collection. Included are:
•  Hot Potato
•  Can You (Point Your Fingers and Do the Twist?)
•  Rock-A-Bye Your Bear
•  Toot Toot, Chugga ... more...