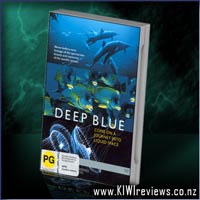 During one sequence, the camera plummets as far as 5,000 metres below the ocean to find some of the most extraordinary alien-like creatures you'll ever see - some of which are newly discovered species. After seeing this, it comes as no surprise to learn that more is known about outer space than our own ocean depths.

With sparse but well placed and informative commentary by Michael Gambon and a big score by George Fenton conducting the Berlin Philharmonic Orchestra, Deep Blue depicts the awe-inspiring sights, sounds and spectacle of the sea and the creatures that live in or use it. This is the never-ending cycle of nature and the often sad and brutal truth of survival in such scenes as killer whales plundering baby seals or a mother whale unsuccessfully protecting her baby.

In a film of endless and breathtaking wonders there is still nothing quite as remarkable as those sights that await us when high-tech submersibles plunge to the depths of the Great Mariana Trench and introduce us to its often-bizarre inhabitants.

If you are at all interested in finding out what other life forms are cohabiting this ball of dirt with us, this dvd is a great starting point. A collection of Discovery Channel and BBC documentaries clipped together with a common 'life that inhabits environments in or around water' theme, they have been stitched together in such a way as to appear like a single mega-doco, the sort of thing you would see on National Geographic. This one just blew my mind, the teeming life in the darkest areas of the oceans. 5000m underwater, the pressure would crush a human to the size and shape of a squashed beer can, no light ever reaches these depths, and yet, clustered around geothermal vents in the seafloor is life in all its glory. These vents spew out superheated water so full of minerals that it would be toxic for most life on earth yet the creatures that live in and around these vents thrive. These vents are the most dense pockets of life on the entire planet, that we have discovered so far, at least. I was so stunned and impressed by this title I plan to seek out more like it to build a reference library my daughter can use to increase her knowledge far better than anything todays education system can provide. A totally stunning production well worth every cent you pay for it, and more.

Hatching the Past takes a rare and exciting look into the life of dinosaurs that once roamed our planet. A captivating and interactive experience for all ages!

The exhibition is organised around eight sections which cover a large variety of different dinosaurs including plant eating dinosaur eggs and their babies.