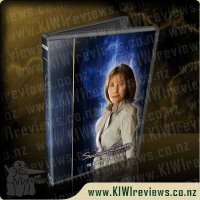 Packed full of big adventures, superb effects and wicked comedy, this sci-fi drama is one of the most popular children's TV series on Nickelodeon New Zealand.

Sarah Jane Smith is known to Doctor Who fans as the vivacious, daring, investigative journalist who, since returning to Earth after travelling with the Doctor, has dedicated her life to tracking alien activity right here on Earth. She inhabits a world of mystery, danger and wonder where aliens, supercomputers and monsters are commonplace!

Doctor Who: Season One
Rating: 9.4

Sarah Jane Smith, a beloved companion in the Doctor Who series and so this was a must for me to watch.

I missed it when it first came out on TV, but having a Quickflix membership at the moment I have been able to have a marathon of the first series of The Sarah Jane Adventures. This is a bit more kid friendly than some Doctor Who episodes, though my son already loves Doctor Who, and so my four year old and my six year old happily watched several episodes with me. Sarah Jane is still protecting the world from aliens, her companions (can't think of a better word for it) are the girl who lives across the road, a school mate and her 'son' (he was created by aliens and she adopted him).

the characters develop well with Sarah Jane and her son trying to work out the dynamics of their sudden new family and with neither of them having any of the experience. There is also great acting from the boy playing Luke as there is a great mixture of eagerness, vulnerability and nievity (he may be a genius but he doesn't know human interactions well).

If you like Doctor Who then The Sarah Jane Adventures is a great show to watch as well.

My daughter has taken to Dr Who like a duck to water, but the newer Dr Who is not made with young children in mind. So she is watching a lot of Tom Baker and the like. I found out about Sarah Jane Adventures right around the time of Elisabeth Sladen's passing. This show is specifically designed for children in mind. It's fairly safe fare for kids 8+, My daughter is 5 but she is quite stoic and isnt too phased by scary monster/alien costumes and CGI. However, there is some "off screen" killing that occurs so if you have a sensitive wee soul, this is probably not for them.

Sarah Jane is a well loved Dr Who Companion character who has been revisited a couple of times, including on Dr Who recently. K-9 makes a couple of appearance in the series too, but is not in there more than a minute at a time. These short visits were too short for me and my daughter as we are both big fans of the silly metal dog. Sarah Jane adventures locally, investigating alien stuff. She is a bit of a loner character. Almost the scary old lady that children might taunt, but she be-friends some local kids and they all fight to save the world one alien species at a time.

The characters are a little annoying. Maria's character is okay, and I like her father. But her mother is so frustrating and selfish. I really dislike listening to her blah on about herself and her new man and hitting Maria's father up for money. I know people like that can exist, but she makes me very angry. Luke is a fun character, being brand new but a pre-teen gives them a lot of social things to explore and work through for the audience who are navigating similar things. I think this show is well worth your time if you like Dr Who and Torchwood. Its a great intro to the Dr Who universe for younger viewers.

One icon stars as another when Hollywood legend, John Malkovich plays Edward Teach, better known as the barbarous pirate Blackbeard in the NBC series, CROSSBONES.

It is 1729 and on the secret island of Santa Compana, the infamous Blackbeard reigns over a rogue nation of thieves, outlaws and miscreants. Part shantytown, part utopia, part marauder's paradise, this is a place like no other. Blackbeard covets the Longitude ... more...