ProdID: 6770 - Dead Upon a Time
Written by: Elizabeth Paulson 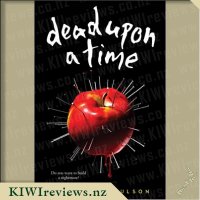 Dead Upon a Time product reviews

One girl is kept in a room where every day the only food she's given is a poisoned apple. Another is kept in a room covered in needles -- and if she pricks her finger, she'll die. Then there are the brother and sister kept in a cell that keeps getting hotter and hotter. . .

A sinister kidnapper is on the loose in Kate's world. She's not involved until one day she heads to her grandmother's house in the woods -- and finds her grandmother has also been taken. Already an outcast, Kate can't get any help from the villagers who hate her. Only Jack, another outsider, will listen to what's happened.

Then a princess is taken, and suddenly the king is paying attention -- even though the girl's stepmother would rather he didn't. It's up to Kate and Jack to track down the victims before an ever after arrives that's far from happy.

I wanted to read this book as I love to read different versions of well known fairy tales and see how they can be re-imagined. This book centers around Miss Hood, who on a trip to take supplies to her Nan, encounters wolves and a missing Nan... Sound familiar? Soon she gains a friend in a fellow outcast and is roped into the Kings service when his daughter goes missing. There's so much potential to this story, from the brief descriptions of the torture rooms, to the connections between various characters and of course, simply having them all exist in the same universe.

The book took its time getting into things but it felt natural and flowed really well but I found that the closer we got to the end of the book the more I was questioning when the action was going to happen and the further in I got the more concerned I got. Katie and Jack are well written, I could imagine their characters nice and easily but some of the other characters, such as the kings wife, just didn't feel quite right to me. The concept behind this story is a really good one, but there's hardly any delving into the rooms the characters are imprisoned in and the end just feels so darn rushed as well as the fact that certain secrets are uncovered at the end, which really could have done with a bit more of a closing explanation.

While I love the concept behind this, a good strong lead female and some great ideas, I feel this would have been far better had it been a bigger book as then we could have gained more content etc.

The premise behind this book is fantastic. Kate Hood's grandmother is missing, no one in the town will help her except for another town outcast Jake. Together they find the missing children and find the witch behind this terrible act of torture. It has that 'Hollywood Blockbuster' feel to it and would not surprise me in the least if it is made into a movie. I kept getting that feel of Magnificence.

I think this would be suited for very mature, well read young adults as it is hard at times and I found on more than one occasion I had to reread a paragraph or two to fully understand what was happening. I did not entirely enjoy the writing style but like I said above I loved the idea of what the book was about. The chapters where rather long and very involved. However, it was fun trying to guess what character was being discussed and I felt rather silly when I realised who Kate was, considering all of the clues.

The apple on the front cover reminds me of Once Upon a Time the Television show. Although I do not watch it I am aware of what it is about and this could easily be part of that plot. It did not discuss all of the victims that much or also what was occuring to all of them which is a pity as I was more interested in that then reading of the journey. I enjoyed aspects of the book and would be keen to read again at some stage. First time in a while did not connect all of the dots.

I, Geronimo Stilton, was shocked to find myself back in the Kingdom of Fantasy for a sixth time. I was needed to fulfil the Ancient Gemstone Prophecy! The evil empress of the witches was after the Royal Sapphire. If she united it with her Royal Ruby, it would give her immense power. The entire Kingdom of Fantasy was in danger! It was up to me to find the two gemstones first, with the help of new friends - and this time, I had to travel in disguise. Cheese niblets! What an incredible journey!