The Underland Chronicles 5 - Gregor and the Code of Claw review

ProdID: 5068 - The Underland Chronicles 4 - Gregor and the Marks of Secret -  Written by: Suzanne Collins 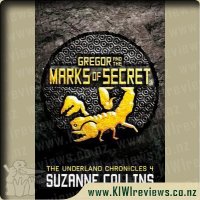 It's only a few months since Gregor and Boots returned from the Underland, leaving their mother behind to heal from the plague. Though Gregor's family receives frequent updates on her condition, they all know Gregor must return to fulfil his role as the warrior who is key to the Underlanders' survival. Accompanied by his now-talkative little sister Boots, still considered the honorary "princess," Gregor joins forces with another princess - 12-year-old Luxa - and Ripred the rat to defend the Underlanders and the vulnerable "Nibblers," or mice, from the rat army.

It was really clever to hide the prophecy as a child's song. Gregor goes to visit his mom, who is still trying to recover from the plague, and gets drawn into helping Luxa find out what has happened to the mice, why are they disappearing without a trace? They all believe it to be an easy goal, just as things look boring an earthquake makes a short trip last a few more days.

Some rather obvious relationships are starting to be more noticeable, as usual nothing can be straight forward. Friendships are strengthened and we learn more about Hazard and his ability to learn insect languages, would that be something that could be useful?

What is the prophecy of Time? The underlanders are hesitant to tell Gregor anything about it, so he guesses that can only mean it tells of someone's death. It is a good lead in to the final book

After the events of book three, Gregor has spent much time visiting the Underland, all he expects is to be waiting for his mother to return with him and all will be well, but when Luxa receives a request for help from the Nibblers Gregor ends up drawn into another quest.

This time we don't have a prophecy hanging over Gregor's head, though there is the occasional mention of one that they don't want him to know about. This book is more of a prelude to the final book in the series and the two could have easily just been combined to create one bigger book, but given the age aimed at I can also understand Collins decision for a total of five instead of four books. I read this book directly after reading the third book, and couldn't put it down, started it last night and finished it today.

Relationships between the characters builds a bit more in this book than in the previous books which is nice, and there's still enough action in this book that you don't feel like the pace is too slow or too fast (and having already read the final book, this book is a perfect pace as a lead up to the final book). As with the last book we learn a lot more about life in the Underland and Regalia and its people.

This is another good book in what is a really fun series.

Children will delight in watching a rainbow appear as they turn the pages of this beautiful book. Each colour is accompanied by a piece of the story.