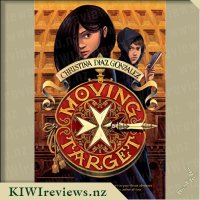 In this exciting and action-packed adventure by an award-winning author, a young girl discovers her secret ancient bloodline. The fate of her family, and the world, may rest in her hands...

Cassie Arroyo, an American studying in Rome, has her world ripped apart when someone tries to kill her father, an art history professor at an Italian university. Is she their next target?

Cassie sets out to uncover what is happening, only to learn that she is a member of an ancient bloodline that enables her to use the Spear of Destiny--a legendary object that can alter the future. Now running from a secret organization intent on killing those from her bloodline, Cassie must--with the help of some friends--decipher the clues that will lead her to the Spear.

Christina Diaz Gonzalez has created a fast-paced thrill-ride of a book, rich with riddles and myth, that young readers will not want to put down.

Klutz: The World According to Klutz
Rating: 8.6

The blurb for this book, as above, tells you that the young audience won't be able to put this book done, well, neither could I. I sat down this morning to start reading it, and before I knew it I was finished!

Cassie, our main protagonist, is rather well written and though her best friend Simone and the thorn in her side (to begin with) Asher do join in as the next two main characters, Cassie remains the main and in the lead and even though she has her doubts and fears, it is her who gets to make the choices and be in just as much danger as anyone else. I also love that whilst Asher joins in as her protector... she doesn't become the damsel in distress and reliant upon him to do everything, she doesn't change just because he is there (as I have seen happen so many times before). All three of these children are full characters, we get enough little tidbits here and there about them, so each still have secrets that we have yet to learn about their past.

As for the plot itself, even though it's much along the line of most treasure hunting, follow the clues, survive the bad adults trying to kill you, there were still enough moments in it that kept the book interesting, and though I could guess in some parts what was going to happen, I still got surprised now and then. My one gripe about the book is that there is a betrayal and it was blindingly obvious that it was coming, but that was the only thing that detracted from the book for me.

The book is really well paced and doesn't slow down, it was a great read and I can't wait to see where the story goes in the next book.

This is definitely a story that you do not want to put down. I started reading it one night, and kept reading until -much to my disappointment- I couldn't physically stay awake any longer. So I waited until I had enough time to get to the end of the book without having to stop again. And I'm glad that I chose to do it that way. This book is constantly moving forward, and there are a number of things that you would be well served to remember as the story progresses. Interruptions can lead to a little bit of confusion when things from the past are brought up, and you really don't want to have to go back and re-read parts. You want to just keep plowing on forwards.

And that is what the book does well. It provides little hints, and tidbits of information as you go, and leaves it to you to decide what may be relevant or not before revealing the next part of the storyline. For those young readers that are just starting out in the riddle/mystery genres, this makes a great starter book. While I like to have determined the solutions to riddles before the reveal, the story naturally repeats itself throughout the narrative, and gives the reader a chance to rethink important plot points before the storyline recommences.

With a very minimal character list (only approximately 15 characters are mentioned by name in the entire book), the author does well to intertwine various storylines of highly varied characters with their own backstories. The plot is compelling, with mention and introduction of multiple secret organisations, that leaves much to the imagination, and plenty of room for use in future stories.

The main characters are easy to empathise with, being the same age as the target audience. Kudos to the author for the use of female protagonists, that doesn't just play them off as weak and useless. While the characters are not immediately strong and independent, there is noticeable growth and changes in the personalities and the actions of the characters.

The story progresses along at a great speed, never truly slowing down, and gave the impression of being in a "National Treasure", "Indiana Jones", or "Tomb Raider" film. Very engaging. That being said it was slightly too predictable for my liking, as I picked up the first hints of things going amiss, long before it was made apparent to the protagonists, but I did enjoy feeling that sense of dread as the story progresses towards the inevitable climax. I was very pleased to have an open ending to the story, and I look forward to reading the follow ons (Hopefully one with a bit more length to it!).