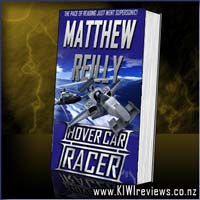 A SPORT LIKE NO OTHER
In the world of the near future, the most popular sport in the world is hover car racing. Superfast and dangerous, its heroes are the racers: part fighter pilot, part race-car driver, all superstar.

A BRUTAL QUALIFYING SCHOOL
But to get to the Pro Circuit, you must first pass through the International Race School, a brutal cauldron of wild races on even wilder courses, where only the best of the best will survive-

JASON AND THE ARGONAUT
This is the story of Jason Chaser, a talented young racer selected to attend the Race School. He's younger than the other students. He's smaller. His trusty car, the Argonaut, is older. But Jason Chaser is no ordinary racer. And as he races against the best drivers in the world he will learn that at Race School winning is everything, that not everyone in this world fights fair, and that you never ever have any friends on the track-

Strap on your seatbelts and hold on tight because the pace of reading just went supersonic! From Matthew Reilly, author of Ice Station and Scarecrow, comes his most original novel yet - no less than the fastest story ever told.

There has yet to be a Reilly book that I didn't enjoy, and this was no different.
I was a little surprised that this was based on teenagers rather than the more mature (and worldly) characters that Reilly usually writes about. However, I soon discovered that I liked Jason and Bug, and that had they been adults the story wouldn't have had the same punch to it.

This story is about heart, determination, hard work and never giving up. It shows that no matter what, if you want something enough and are willing to do just about anything, you can achieve your dreams.

Jason and his brother Bug, along with Sally, their pit boss show everyone that you don't have to be the best to win - and winning isn't always about first place.

Like the other reviewer said, it's a little tricky to get your head around the whole concept of hover car racing to start with, but once it's all explained, you get into the speed and thrill of it all.

This is a very different book for the world-reknowned Matthew Reilly. I must admit I was a bit skeptical when I started this book, but I was wrong. Even though it is the only Matthew Reilly book not to have me hooked within two pages (it took 8) Reilly eventually brought himself up to standard as the book progressed.
A bit boring at the start, and a bit difficult for those without a PhD in hovercar racing to understand in the beginning, once things start to get explained it becomes a lot easier to read.
Originally written to be read as a series (i.e. read part one, then put the book down for a couple of days, then read part two) this book comes number three on my Matthew Reilly chart (The leaders being, at number one: Seven Ancient Wonders, and number two: Scarecrow.
Though this book is a bit (OK, a lot) futuristic, once you start to understand the technology involved in hovercar racing, it becomes more and more believable.
This is a great read and I could definitely read it again, in fact I plan to.

When the most advanced aircraft ever designed vanishes over the South Pacific, NUMA operatives Kurt Austin and Joe Zavala are drawn into a deadly contest to locate the fallen machine. Russia and China covet the radical technology, but the United States worries about a darker problem. They know what others don't-that the X-37 is carrying a dangerous secret, a payload of exotic matter, extracted from the upper reaches of the atmosphere and ... more...